Days Of Our Lives Spoilers: Eric And Sarah Make Love 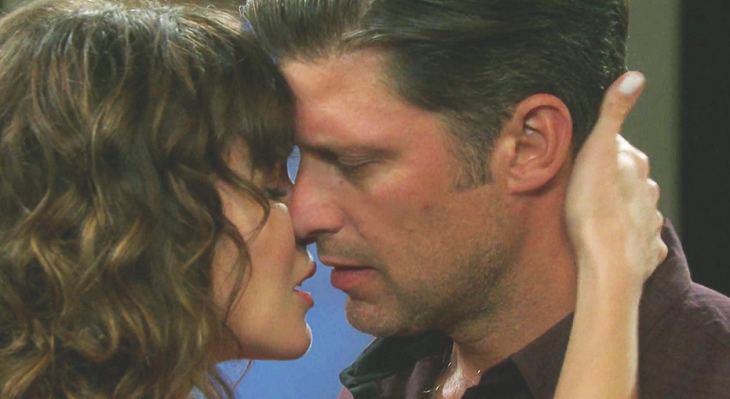 Days of Our Lives spoilers tease that Eric Brady (Greg Vaughan) and Sarah Horton Brady (Linsey Godfrey) will finally consummate their secret love in the aftermath of Sarah’s terrible Freudian slip in bed with Rex Brady (Kyle Lowder). Eric has been rejected by the woman he believes to be Nicole Walker (Adrienne Zucker) who just married Tony DiMera (Thaao Penghlis).

Days of Our Lives viewers will recall the episode where Sarah had made one big oops when she and Rex were snuggling in bed. Rex told her how much he loved her, and she responded back that she loved him too – but called him Eric! That is the mother of all Freudian slips, and there’s no coming back from that one!

If she had been talking in her sleep, that would be one thing, and it could be explained away as a dream, but she was wide awake. This will cause a huge blowup between Rex and Sarah, of course, which will culminate in Rex quitting his job at Salem University Hospital and leaving Salem.

Once the big blowup has taken place, Sarah will seek out her mother, Maggie Kiriakis (Suzanne Rogers) for a heart-to-heart talk about what happened. Maggie will tell her she should have followed her heart and what she felt, instead of trying to make herself love Rex to make things right. Maggie is able to show Sarah that she can’t pretend she doesn’t have feelings for someone when she does, and trying to make them go away by involvement with a different person doesn’t work.

Sarah heads over to tell Eric the truth and what happened between her and Rex, but discovers that Rex got there first. She’s ready with everything she has to tell Eric the whole truth about her feelings because they’ve been pushed down a long time and she’s ready to explode!

That might be what caused her to call Rex by Eric’s name to begin with, because she and Rex witnessed fake Nicole Walker (Adrienne Zucker) shoot Eric’s dreams of a revived future with Nicole down in flames when she announced her marriage to Tony DiMera (Thaao Penghls), and his fight with Brady Black (Eric Martsolf). She definitely had Eric on her heart and mind when she went to bed with Rex.

Eric doesn’t respond at first and doesn’t really hear what Sarah is trying to tell him. He is still too wounded about fake Nicole shooting him down and any future with her gone in one fell swoop, and to a much older man at that. Tony is easily old enough to be her father.

Sarah will tell him over and over that he has no chance with Nicole and she has no chance of making up with Rex, and that it’s him she loves and wants to be with. And finally he gets it and is able to accept there is no hope for a future with Nicole and that Sarah and Rex are over for good. He still loves Nicole but realizes (or admits to himself) that he loves Sarah too, and feels validated.

Eric and Sarah become very emotional with all the pushed down feelings for one another surfacing, and consummate their relationship. The next morning Rex shows up and confronts them, but he realizes his and Sarah’s marriage was over before it began and never should have taken place to begin with. It finally hits Rex how many times Sarah turned his proposals down before finally accepting. Then Rex quits his job at the hospital and leaves Salem as Eric and Sarah finally commit to each other.