General Hospital Spoilers: Will Kim And Carly Bond Over Their Grief? 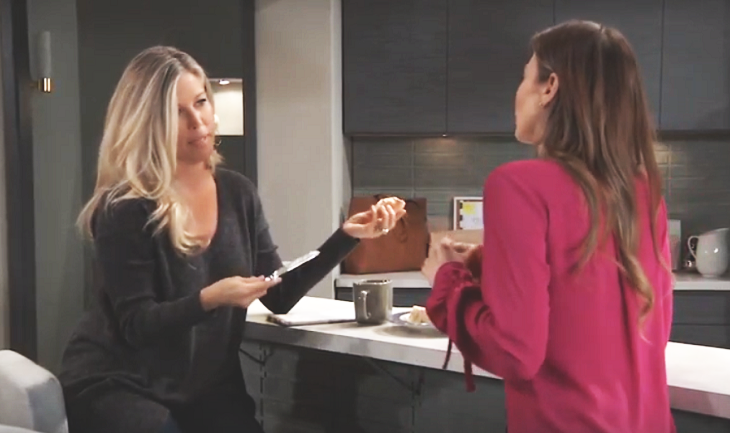 Kim and Carly could be a very good support system for each other, Carly having lost Morgan Corinthos (Bryan Craig) and Kim having much more recently lost hers, Oscar Nero Quartermaine (Garren Stitt). Carly and Kim already know each other through their children becoming involved, since Carly is Josslyn Jacks’ (Eden McCoy) mother.

Kim is starting to act a little more normal and is no longer trying to have another baby to replace Oscar. Carly is dealing with the pregnancy of a new baby, one who will have special needs. Kim, as an OB/GYN, has likely dealt with patients who were pregnant with spina bifida meningocele babies before, even though this form of spina bifida is one of the least common varieties.

In this form, the baby is born with a sac on the back containing the membrane that surrounds the spinal cord; however, it is easily repaired by surgery with little to no nerve damage. It may help Kim to help Carly with this information and it will help Carly to have someone that knows who is not currently her doctor tell her this.

Both Kim and Carly need someone to lean on besides the men in their lives, and neither one really has a girlfriend she can hang out with. A “girl buddy” can often be helpful as someone to talk to about things their husbands or boyfriends don’t understand, or just don’t want to hear.

Lots of men shy away from women who are emotional about things and don’t know how to respond, or else they want to fix things that can’t be fixed and don’t need to, when their women just want them to listen.

Carly in particular is not the type who wants to talk in a group, such as in the support group at General Hospital for parents who have lost children to death that Michael Corinthos (Chad Duell) and Willow Tait (Katelyn MacMullen) met in, and Kim, although she is talking with a Dr. Massey (uncast character) about her grief problems, has not mentioned the grief group. Sometimes it’s just easier – and better – when it’s one on one, instead of in a group of people.

Kim and Carly could easily bond, and perhaps should, over their losses of their sons and over Carly’s special needs baby; in addition, Oscar’s father is Drew Cain (Billy Miller), the twin brother of Carly’s best friend Jason Morgan (Steve Burton), so that is something else they have in common.

Will Kim and Carly become good friends over the things they have been through? A heart-to-heart talk is a good place to start! Stay tuned to General Hospital and keep checking General Hospital spoilers frequently for all the latest news, updates and developments!