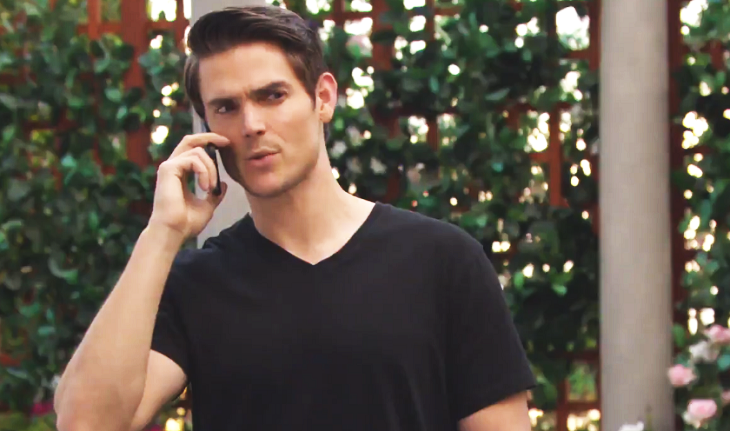 “The Young and the Restless” spoilers for Monday, August 5, tease that Phyllis Summers (Michelle Stafford) will hope to make a deal with Adam Newman (Mark Grossman). At Adam’s penthouse, Phyllis pushes Adam to accept an offer of $10 million for the Grand Phoenix. She suggests she can pay in installments, but Adam wants $15 million and won’t back down on it.

Phyllis decides to leave as Michael Baldwin (Christian LeBlanc) arrives. He doesn’t divulge the reason for his visit to Adam. Once Phyllis is gone, Michael gets Adam’s gratitude for helping him file a petition with the court. Adam’s going to see Christian Newman later today. He makes it clear that Michael will be his attorney until he formally takes over as DA.

Phyllis finds Theo’s launch party plans impressive, but she seems wary as far as Summer’s concerned. Theo suggests he’s on the same page with Phyllis about Kyle’s treatment of Summer. They rant about Kyle a bit before Phyllis suggests some people can’t face who they really are.

Afterward, Theo notes that Adam’s reaping the benefits of Phyllis’ hotel efforts. She hints at something else on her agenda, so it sounds like Phyllis is down but not out! In the meantime, Kyle meets up with Mariah Copeland (Camryn Grimes), who offers to throw a joint bachelor and bachelorette party. She’s just going to combine Kyle and Lola’s shindigs into one big bash.

At Nick Newman’s (Joshua Morrow) place, he learns Chelsea Newman’s (Melissa Claire Egan) inheritance is now in the bank. She’s uncertain of what’s ahead and notes that her business wouldn’t be the same without Chloe Mitchell (Elizabeth Hendrickson) as part of it. Chelsea needs to figure out her next move, but she does know she won’t be going back to conning.

In the park, Adam faces Billy Abbott’s (Jason Thompson) fury over Delia Abbott’s (Sophie Pollono) doll, which Billy assumes Adam planted in his bed. Adam shuts down that idea and insists he wouldn’t disrespect Delia’s memory. The topic of Adam’s visit with Christian comes up, so Billy contends that Adam should cherish every moment he gets.

Soon after, Adam calls Nick and notes that Victoria Newman (Amelia Heinle) violated the rules of the custody agreement. He explains how he’s secured a visit and intends to tell Christian that he’s his real father. Nick reels, but Chelsea frets about the idea of him interfering and making trouble for himself.

Later, Nick spots Michael at Crimson Lights and blasts him over how everything’s gone down. He feels Adam must have some serious dirt and warns that whatever happens to Christian next will be on Michael. Back in the park, Adam bonds with Christian by playing soccer with him. He mentions Connor Newman (Judah Mackey) and eventually confesses that the boys are brothers.

Adam shares that he’s Connor’s dad and Christian’s real daddy, too. Nick shows up just as Adam makes the declaration, so a major face-off is on the way. Across town, Chelsea sees Billy at Society and hears about the doll drama. She doesn’t think Adam would do that, but Billy isn’t as convinced that Adam’s made any changes in his life. However, Billy’s glad that Chelsea has moved on and is protecting Connor.

Young And The Restless News: Eileen Davidson Has A Message For Fans

Billy heads home and has difficulty sleeping again. “The Young and the Restless” spoilers say his Delia ordeal is only going to get worse, so don’t miss all the shockers. We’ll give you updates as other Y&R news and rumors emerge. Stay tuned to see what’s coming up in Genoa City.