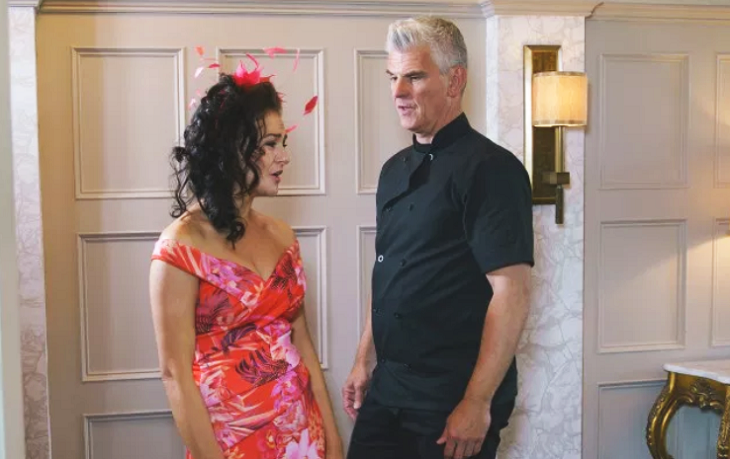 Coronation Street spoilers for Friday, August 2 finds that Robert Preston (Tristan Gemmill) will have to do quite a lot of explaining after Carla Connor (Alison King) catches him in his own web of lies. As a matter of fact, she will manage to overhear a conversation between Robert and his girlfriend Vicky Jeffries (Kerri Quinn). Here’s what you need to know.

Robert might be a master chef, but he’s also a master liar. Carla will demand answers after she hears Robert talk to his pregnant girlfriend, despite the fact that he is also engaged to Michelle Connor (Kym Marsh).

Realizing that he might have said a little too much, Robert will try to wiggle his way out of this situation by telling Carla that he was talking to a rep from Young Offenders about his start date as a mentor chef.

Coronation Street Spoilers – Robert Preston Will Be Seething With Jealousy

Michelle might have lost her mind in recent months, but she hasn’t lost her hearing. As much as Robert is trying to change the subject, Carla can’t help but bring up the fact that he was arrested last year after he attacked Michelle’s stalker.

Afterwards, Robert will call Vicky just to find out that her ex-boyfriend is there with her. This will leave him seething with jealousy. With so much going on, Robert will soon have to choose between either living a life with Michelle or raising his baby with Vicky.

Elsewhere, Seb Franklin (Harry Visioni) will see his life on the line after he gets viciously attacked by people who are connected to the human trafficking ring that has been operating behind the scenes at the local nail salon. Seb will get a text from his girlfriend Alina telling him to meet him after work. He walks straight into a trap and gets attacked instead.

Two-timing and lying builder Jan Lozinski (Piotr Baumann) will end up taking him to the hospital after his attack. But when Eileen Grimshaw (Sue Cleaver) quizzes Jan about the attack, he will tell her that he was actually working on a project in Birmingham.

Eileen then decides to take matters into her own hands and rushes to the nail salon, just to see Jan cleaning up the evidence at the salon. After she corners him, Jan will admit to Eileen that he is a liar and a cheat and that he never cared for her.

He then smashes Eileen’s phone to stop her from calling the police. Fortunately, the local police will get a tip off after a witness saw Seb getting beaten up. There’s hope for justice as Alina and the rest of the girls at the nail salon will finally be freed.