Young and the Restless Weekly Spoilers, August 5-9: Kyle Has A Secret, Adam Tells Christian The Truth, Connor And Anita Arrive 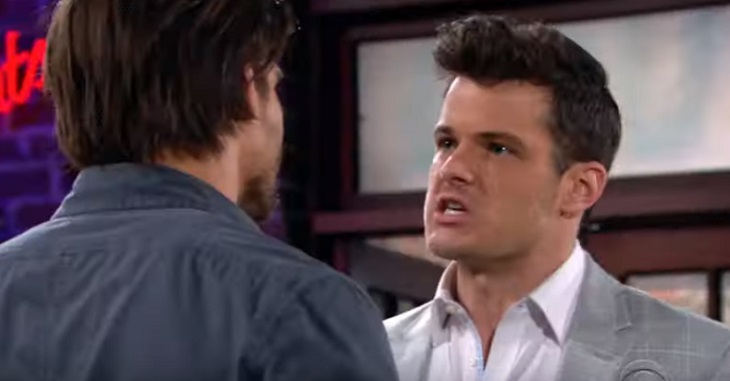 The Young and the Restless (Y&R) spoilers tease that during the week of August 5 some heated drama is ahead. Kyle Abbott (Michael Mealor) has a secret and Theo Vanderway (Tyler Johnson) want to expose it. This could spell big trouble for Kyle and his relationship with Lola Rosales (Sasha Calle).

Apparently, Theo knows something about Kyle that could really cause a problem with Lola. Soap Central teases that Theo threatens Kyle that unless he does what he wants, he will spill the truth. We all know that Kyle will do what he has to do to keep Lola in the dark. It must be something pretty dark for Kyle to feel s insecure.

Next up, Adam Newman (Mark Grossman) is having trouble keeping his mouth shut about his son Christian Newman. The Young and the Restless spoilers say that Adam believes that he has the right to get to know his son, but Nick Newman (Joshua Morrow) believes that Adam should stay far away.

Y&R spoilers state that Adam tells Sharon that the next time he sees Connor, he will tell him the truth—Nick is not his dad, he is. Of course, Sharon informs him that is a very bad idea. She thinks he should get to know Christian as “Uncle Adam.” He agrees to be open to the idea.

When Adam and Nick come face to face, things get intense when they argue about who should raise Christian. One thing leads to another, and Nick punches Adam. This could lead to more legal trouble for Nick if he isn’t careful.

The Young and the Restless spoilers tease that Adam meets up with Sharon, and they will finally hit the sheets. The duo can no longer deny they have sexual attraction.

Young and the Restless Weekly Spoilers – Anita And Connor Show Up

As if Adam’s life isn’t complicated enough, he will find out that Connor is back in Genoa City. Will he remember his dad? It sounds like he may have been told mean things about Adam. If that’s the case will he be scared of him?

Y&R fans are just glad that Anita Lawson (Catherine Bach) will be back on the scene for a little while.