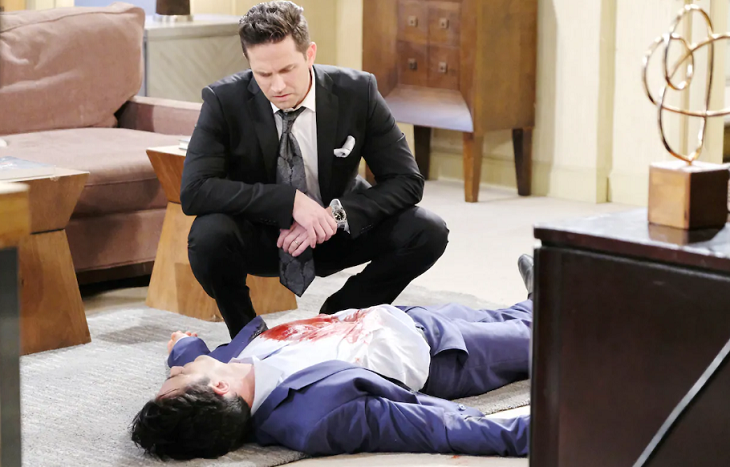 “Days of Our Lives” spoilers for Tuesday, August 6, tease that Ted Laurent (Gilles Marini) will realize he’s made a huge mistake. He took a risk by grabbing the weapon in Kristen DiMera’s (Stacy Haiduk) motel room, but he did what he had to do. DOOL viewers just heard the gun go off, so don’t be surprised when Ted pulls back with a bloody chest, falls to the floor and dies.

That’ll leave Kristen and Tony DiMera (Thaao Penghlis) with a big problem. They’ll have a mountain of incriminating evidence in front of them, so they’ll do their best to get rid of it.

“Days of Our Lives” spoilers state that Kristen will take the lead on this, but she’ll get caught somehow along the way. Of course, Kristen will slide out of trouble as usual. She always has a backup plan in case of disaster.

Speaking of disasters, Stefan DiMera (Brandon Barash) will face one more on Tuesday’s episode. “Days” spoilers say Stefan will stumble across a shocking scene. He’ll find Ted’s body and end up getting caught with the gun in his hand.

As you might expect, Stefan will seem awfully guilty. He’ll be arrested for murder soon, so Stefan’s legal issues are getting worse every day!

Other “Days of Our Lives” spoilers reveal that Eli Grant (Lamon Archey) will formally accept Jack Deveraux’s (Matthew Ashford) job offer. However, Eli may want to make sure they’re in agreement on how things will be done at the Salem PD. Eli will want run the place by the book, not bend the rules constantly like Eve Deveraux (Kassie DePaiva) did.

Since Jack’s so fed up with Eve right now, he should have no qualms about that. Jack just needs someone he can trust to handle Salem’s many crimes, and Eli’s the perfect man for the job. It won’t be long until Eli’s busy with Stefan and any other drama that heads toward the station.

Days of Our Lives Spoilers: Could Stefan and Gabi Be Salem’s Next Super Couple? https://t.co/l80FzoXf0e pic.twitter.com/BpbLzYTR9c

Over with Rex Brady (Kyle Lowder) and Xander Cook (Paul Telfer), they’ll form a surprising bond over drinks. They’re certainly not going to form a lasting friendship, but they’ll toss a few drinks back together and connect over their mutual feelings for Sarah Brady (Linsey Godfrey).

It looks like some fantastic scenes are coming up. We’ll give you updates as other “Days” news and rumors emerge. Stick with DOOL and don’t forget to check Hollywood Hiccups often for the latest “Days of Our Lives” spoilers, rumors, updates and news.