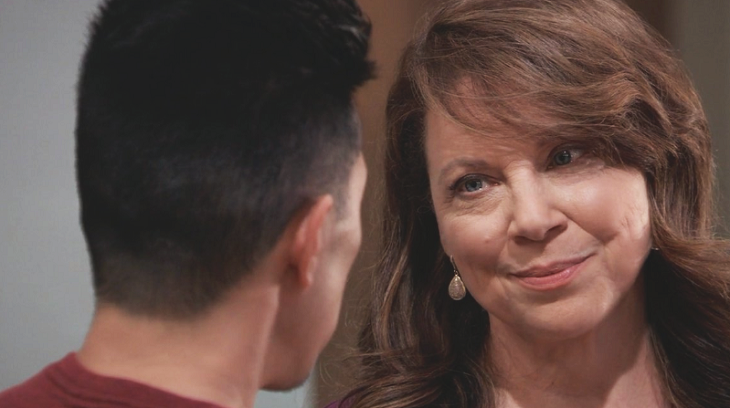 General Hospital’s Carly Corinthos (Laura Wright) is in the park talking to the baby when Kim Nero (Tamara Braun) approaches. Kim asks Carly how she and the baby are. Kim would love to know what is going on with the baby. Carly tells Kim the baby has spinal Bifida. Kim tries to reassure Carly and says she is there if she needs to talk. Carly says she may text in the middle of the night.

Kim tells Carly she is working by hasn’t been able to perform a delivery yet. Kim and Carly talk about how much she misses Jocelyn Jacks (Eden McCoy). Carly tells Kim she can see people when she is ready, she has to grieve in her way and time. Carly tells Kim the pain of losing Morgan Corinthos (Bryan Craig) never goes away. Carly tells Kim that eventually, she will start focusing on other things. Kim says she doesn’t have a support system, Carly begs to differ.

The reminders everywhere suffocate Kim. Carly thinks Kim might need a change of pace. Carly hopes she wasn’t overstepping. Drew Cain (Billy Miller) approaches Kim, and she tells him she is leaving Port Charles. Drew wants to know when Kim is leaving; she’s not sure. Drew understands why Kim would leave. Drew hugs Kim and wants her to stay in touch. Kim promises to take care of herself, Drew walks away. Julian approaches Kim after overhearing the conversation.

General Hospital’s Brad Cooper (Parry Shen) and Wiley Cooper-Jones (Theo and Erik Olson) stop by GH to visit Lucas Jones (Ryan Carnes). Julian Jerome (William DeVry) approaches and wants to talk. Julian wants to show Lucas something, and they leave Brad to take Wiley to his swimming lesson. Liesl Obrecht (Kathleen Gati) approached Brad and mentioned being pushed off the Haunted Starr. She lets Brad know that she knows he pushed her overboard.

Liesl tells Brad she knows he is not Wiley’s father. Brad admits to trying to kill Liesl. He wants Liesl to agree to a truce, she refuses. Liesl feels guilty for staying quiet about Michael Corinthos (Chad Duell) son. Brad says Wiley being with Sonny will put him in danger. Brad tells Liels that Britt Westbourne (Kelly Thiebaud) knows everything. Liesl promises to keep quiet, Carly sees Brady and Liesl shaking on their deal.

General Hospital’s Julian wants to show Lucas something, and they leave Brad to take Wiley to his swimming lesson. Julian looks at the former DOD house for purchase. Julian wants Lucas’ opinion on the house as a home for him and maybe Kim. Julian says he and Kim might want to have their own child. Julian wants rooms for his grand kids as well. Sam is in a freezer in the living room during this exchange.

General Hospital’s Neil Byrne (Joe Flanigan) shows up at Alexis Davis’ (Nancy Lee Grahn) to talk about last night. Alexis offers Neil a drink, he refuses. Neil says he crossed the line last night, Alexis tries to excuse it. Alexis tells Neil they don’t have to talk about it again.

Alexis admits that she can’t forget the conversation. Alexis says this has nothing to do with their professional relationship. Neil says he can’t see Alexis anymore. Alexis begs Neil not to drop her as a patient, but he cannot risk it. Neil tells Alexis how he started to share about his daughter before this. Neil tells Alexis the pain of losing his daughter is still fresh. He says he cannot take care of Alexis if she is concerned with taking care of him.

Neil tells Alexis she is proving his point. Alexis likes therapy with Neil because he makes her take responsibility for her issues. Neil cares about her as a person, Neil says that is why they need to end this before it is too late. Alexis accuses Neil of abandoning her. Neil says he’s not the right guy, Alexis thinks he is the right guy.

General Hospital’s Hamilton Finn (Michael Easton) approaches Epiphany Johnson (Sonya Eddy) about help with Dr. Cabot (Time Winters) prescriptions. Epiphany wonders why Finn is checking into a criminal like Cabot. Epiphany pulls up the list of prescription and shows Finn. Drew Cain (Billy Miller) arrives, and Finn tells him he thinks there is an issue. Finn tells Drew about Dr. Cabot and then calls Robert and warns him about Cabot.

General Hospital’s Shiloh Archer (Coby Ryan McLaughin) calls Jason Morgan (Steve Burton) and threatens Sam McCall’s (Kelly Monaco) life is Jason doesn’t do what he says. Shiloh sends Jason a picture of Sam tied up. Jason demands to know what Shiloh wants. Shiloh tells Jason to do what he says and come alone, or Sam dies. Jason arrives and demands to know where Sam is. Shiloh takes Jason’s gun, thinking it will protect him, but Jason hits him with the door.

Shiloh tells Jason he wants something only Drew knew and that is where Jason comes into the picture. Meanwhile, Sam screams for help from a freezer at the DOD house. Shiloh tells Jason what he wants. Jason asks how he is supposed to know Shiloh kept his word. Shiloh tells Jason he will be given a picture after he takes the serum. Jason will sacrifice his memories, but a clean slate is nothing new to him. Jason grabs Shiloh and shoves him against the wall. Shiloh asks if Jason wants the memory of Sam or to give her a chance to live as Sam passes out in the freezer.