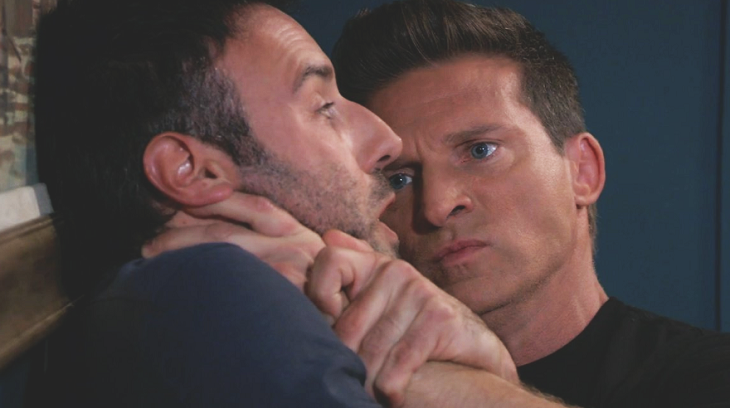 As General Hospital viewers know, Shiloh had someone break into Drew Cain’s (Billy Miller) Aurora office at the Metro Court, break into his safe, and take the flash drive with Drew’s memories on it. He had gotten his medals, apparently ordered by his late son,  Oscar Nero Quartermaine (Garren Lake Stitt) and the citations came with them.

He told Shiloh he no longer needed the flash drive because now he had another way to find out the truth of what happened in Afghanistan, because Shiloh’s story that they had been best buddies never did ring true to him!

General Hospital Spoilers: What If Valentin Had Accidentally Ingested The Truth Serum Himself?

He told him he had made a request for fellow Navy Seal Charles “Tex” Owen’s military records, to see what exactly happened in that IED explosion that he saved Shiloh’s life from. According to what Kim Nero (Tamara Braun) read from the citations that they were discussing, he had saved both Shiloh and Tex’s lives and had been planning to track down Tex and ask him what happened. But Shiloh told him that Tex died. That certainly sounds strange – why would the Navy put in the citation that both Shiloh and Tex’s lives were saved by Drew if Tex had died? That seems like a major discrepancy!

General Hospital viewers will also recall from recent GH episodes that Shiloh made contact with Dr. Arthur Cabot (Time Winters) who is staying right there in the Metro Court hotel. He asked for his assistance with planting Drew’s memories into his twin Jason Morgan’s (Steve Burton) mind. There is one problem with that – it was tried before and Jason’s brain was apparently too damaged to receive Drew’s memories.

As a result of the memory transfer being tried between the two twins, Drew was near death in stasis and Jason was held captive in the Russian Clinic as Patient 6. General Hospital viewers will note that not only does Jason not have any of Drew’s memories, although Drew has Jason’s.

Jason didn’t have any memory of Drew being in the experiment with him. Nor does he remember any time previous to being put in the Russian clinic of both of them being on Cassadine Island, when Helena Cassadine (Constance Towers) was trying to program Drew to be her “toy soldier!”

What makes Shiloh think that Drew’s memories will “take” in Jason this time if they didn’t then? More importantly, does Dr. Cabot even question why Jason doesn’t already have Drew’s memories and still think he’ll be successful in transferring them to Jason? It sounds like Dr. Cabot is nearly as evil as Shiloh.

Shiloh’s evil plan to capture Jason – and quite possibly eliminate him, at least mentally – involves kidnapping Sam McCall (Kelly Monaco) and luring Jason to Shiloh’s hotel room. Jason will go, but will be alarmed when Sam isn’t there.

That’s because Shiloh has locked her in a freezer, and Shiloh will blackmail Jason to accept Drew’s memories in exchange for Sam’s life, which even if Jason accepts, Shiloh won’t likely keep his end of the bargain!

Drew, with Curtis Ashford (Donnell Turner) will figure out that Shiloh intends to plant Drew’s memories into Jason, and they will try to warn Jason but cannot reach either Jason or Sam, although of course they know about the burglary since they came looking for Drew shortly after it happened and Curtis told them.

The police are involved, as seen on Friday’s episode when Detective Harrison Chase (Josh Swickard) asked how Shiloh would be able to use the drive on his own. But it will come down to Drew and Curtis calling the cavalry, namely Sonny Corinthos (Maurice Benard). And they will all head down to Shiloh’s hotel room hoping to take down Shiloh and save Jason and Sam!