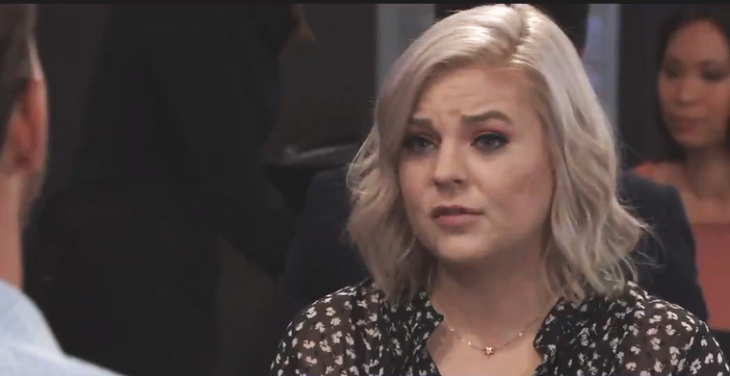 “General Hospital” spoilers for Tuesday, August 6, tease that Alexis Davis (Nancy Lee Grahn) and Neil Byrne (Joe Flanigan) will continue their latest discussion. Alexis tried to talk Neil out of “firing” her as a patient, but it looks like Neil will stand his ground. As Neil prepares to leave, Alexis will suggest they’ve crossed the point of no return.

On the bright side, ending their professional relationship could open the door to a romantic one eventually. In the meantime, a solid couple will consider what’s next. T.J. Ashford (Tajh Bellow) will summon Molly Lansing-Davis (Haley Pullos) to talk about something important: her future. Molly will be taken aback by the topic, but she may like what T.J. has in mind.

Over with Maxie Jones (Kirsten Storms) and Peter August (Wes Ramsey), they’ll mull over Lulu Falconeri’s (Emme Rylan) awful predicament. Lulu’s in love with a man who may never come back to her. It’s a tough thing to accept, so Maxie’s heart will break for her bestie. She’ll need Peter’s support as she worries about Lulu and what’s ahead for her.

Other “General Hospital” spoilers say Josslyn Jacks (Eden McCoy) will find herself in better spirits. She’s been in a funk since Oscar Nero Quartermaine’s (Garren Stitt) death, but Tuesday will bring some happiness. Joss will make a suggestion to Cam and Trina Robinson (Sydney Mikayla). She’ll state that she knows exactly what to do and grin a bit mischievously.

It sounds like some fun’s coming up for the teen scene, which should help Josslyn in her healing process. Unfortunately, Kim Nero (Tamara Braun) thinks her healing process involves leaving Port Charles. She’ll tell Julian Jerome (William deVry) she has to go, but perhaps Julian can talk her out of it – or at least buy some time. Regardless, several GH spoilers for next week include Kim.

Across town, Michael Corinthos (Chad Duell) will need some fatherly guidance. Sonny Corinthos (Maurice Benard) will be happy to provide it during their next conversation. Michael will listen to his dad’s advice and most likely decide it’s good enough to take.

Too bad they’re already in deep trouble! Sam’s locked up tight and Jason’s being forced into the memory procedure. “General Hospital” spoilers say Jason will pummel Shiloh to the floor, but he may have to make a deal for Sam’s sake.

Whatever the case, Drew and Curtis will be in rescue mode soon. They’ll team up with Sonny as they race to Shiloh’s motel and try to stop the memory madness.

“General Hospital” fans won’t want to miss all the action! We’ll keep you posted as other news and rumors emerge. Stay tuned to ABC’s GH and don’t forget to check Hollywood Hiccups often for the latest “General Hospital” spoilers, rumors, updates and news.