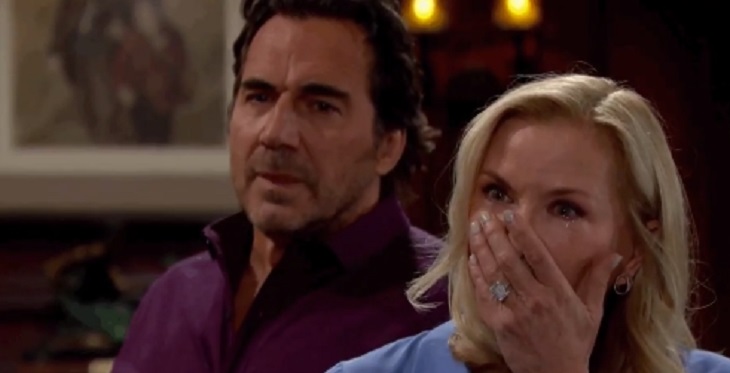 The Bold and the Beautiful spoilers for Wednesday, August 7, tease that Hope Logan (Annika Noelle) will finally be feeling whole. As B&B viewers know, she’s just had a tender and emotional reunion with her daughter Beth Spencer (River Davidson and Madeline Valdez), with Liam Spencer (Scott Clifton) by her side.

The reunited family will enjoy their time for a while, but soon it will be time for Liam and Hope to regroup and they’ll need to have a serious talk, as Hope is going to want to know exactly how it came to be that they were deceived into thinking that Beth died, and how Beth ended up being adopted by Steffy Forrester (Jacqueline MacInnes Wood).

It appears that Liam will start at the beginning and explain the whole story to Hope. The Bold and the Beautiful spoilers say that Hope will be absolutely stunned to hear how Reese Buckingham (Wayne Brady) deceived her and capitalized on the situation when she lost consciousness during Beth’s delivery. Her disbelief will likely turn to anger as she realizes that Reese callously led her and Liam to believe that Beth had died.

But Hope’s shock won’t end there. Liam will have to break the news that Hope’s own cousin, Florence “Flo” Fulton (Katrina Bowden) agreed to pose as the birth mother for Beth she was then adopted to Steffy and named “Phoebe Forrester.”

And if all of this weren’t enough, Hope will learn about how Zoe Buckingham (Kiara Barnes), Xander Avant (Adain Bradley), and Emma Barber (Nia Sioux) learned about the baby swap and adoption scam, and how Emma ultimately lost her life trying to do the right thing and disclose the truth.

Finally, Hope will learn about how Thomas Forrester (Matthew Atkinson) learned the secret, then threatened everyone else into keeping the secret. She’ll be utterly stunned by the tale she’s heard, and she’ll probably realize that, thanks to Liam, she ultimately dodged a huge bullet by getting away from Thomas when she did.

Meanwhile, on Wednesday’s new episode of B&B, Brooke Forrester (Katherine Kelly Lang) will be absolutely outraged. As B&B viewers know, she and Ridge Forrester (Thorsten Kaye) have just heard from Flo that she never gave birth and that the baby known as Phoebe is actually Hope’s daughter, Beth.

Of course, now that the cat’s out of the bag, Brooke and Ridge are going to want answers, so it looks like Flo will end up telling the whole awful story, starting with how things started with Reese switching babies in the Catalina Clinic and essentially ended with Thomas.

Bold and the Beautiful Spoilers – Brooke Blasts Flo, Shauna, & Zoe For Their Deception

Well, according to B&B spoilers, Brooke is going to be beyond furious. Of course, Ridge won’t be happy either, but he won’t have the protective “mama bear” reaction that Brooke ends up having. Ridge will likely start to focus inward, as he starts to think about what Thomas did and what Steffy will soon be going through.

The Bold and the Beautiful Spoilers: Will Flo Skip Town After Baby Reveal Or Stick Around? https://t.co/RQwQXwZPET pic.twitter.com/yL4BVNkgQ1

But Brooke will rail against Flo and Shauna Fulton (Denise Richards). It appears that Zoe will soon be on the scene, and Brooke will want to talk with her, too. B&B viewers can expect a tense scene as Brooke lashes out at the secret-keepers and blasts them for ruining her daughter’s life

Of course, Flo, Shauna, and Zoe will probably try to defend themselves, but it’s difficult to imagine them getting a word in edgewise with Brooke raging against them. It should be a bad scene, as the ladies finally get some of what’s been coming to them.