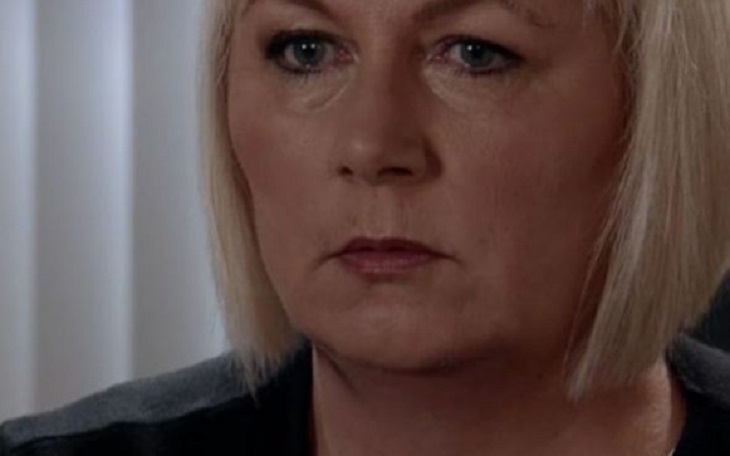 Coronation Street spoilers tease that Eileen Grimshaw might be putting her own life on the line. That’s because she’s vowed to get her revenge on shady builder Jan Lozinski (Piotr Baumann) after finding out that he indeed to be heavily involved in the human trafficking ring that is operating at the nail salon in Weatherfield. Here’s what you need to know.

It all began when Seb Franklin (Harry Visioni) was determined to find out what was really going on with his girlfriend Alina Pop (Ruxandra Porojnicu) and why she was being so secretive about her job and her life in general at the nail salon. He made the mistake of being a little too inquisitive and as a result, got beaten pretty badly by Alina’s handlers.

Seb ended up at the hospital, where he told both Eileen and his mother Abi Franklin (Sally Carmen) what had happened to him. This also served as a warning for Seb to keep his mouth shut before anything else would happen to him, or worse, to Alina.

Eileen now believes that Jan might have something to do with the human trafficking ring and of course, Seb’s beat down. She got even more suspicious when Jan told her that he was working on a project in Birmingham when he was in fact in Weatherfield.

Eileen is now devastated that her love not only lied to her, but is also involved in this horrible trafficking ring. Of course, this isn’t the first time that Eileen’s radar has been off. She also had to deal with some serious drama with her ex Pat Phelan before his tragic death, too. But with Jan she might be in even more danger than ever before.

Coronation Street spoilers tease that Jan will end up telling Eileen the truth, but it will come with a price. There’s a very good chance that Jan and his evil friends will try to put a stop to Eileen and her meddling before she ends up going to the police.

Elsewhere, two-timing Robert Preston (Tristan Gemmill) will also get quite a surprise when an unwelcomed guest arrives in Weatherfield. That person will threaten Robert’s two-timing life that he has been leading between his two lovers: Vicky Jeffries (Kerry Quinn) and his new fiancé, Michelle Connor (Kym Marsh). Of course, fans will have to tune in to find out what will happen next!