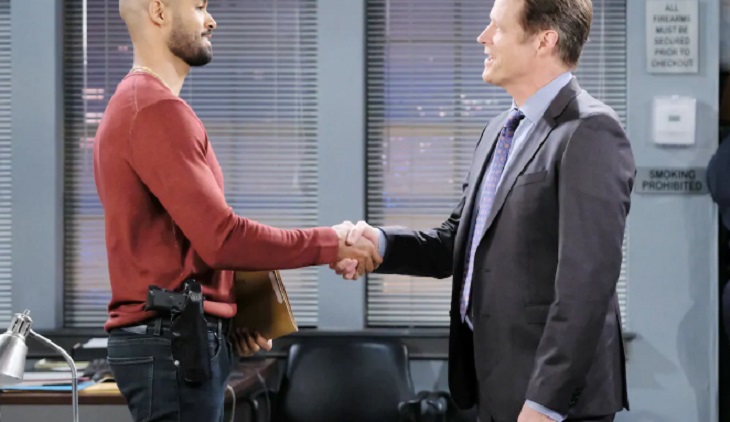 Days of Our Lives (DOOL) recap for Tuesday, August 6, 2019, reveals Jack Deveraux (Matthew Ashford) arrives at the police station for an update on the Stefan Dimera (Brandon Barash) case.

Eli Grant (Lamon Archey) tells Jack he has decided to accept the job as commissioner. Jack wants to plan the swearing-in ceremony, and they need to cut down on lawlessness in Salem. Jack doesn’t think Jennifer will ever want to be with him. Eli tells Jack that Stefan just called him says Tony Dimera (Thaao Penghlis) is alive. Jack wants Eli to go to visit Tony and Nicole Walker (Arianne Zucker). Eli returns to the police station, and Jack asks him to visit Ted with him.

Days of Our Lives Spoilers And Recap – Hope Agrees With Stefan

Days of Our Lives Hope Brady (Kristian Alfonso) runs into Stefan in the square after he tries to contact Ben Weston (Robert Scott Wilson) and says he looks like he could kill someone. Stefan tells Hope he is about to lose everything he has worked for if he doesn’t get some answers.

Days of Our Lives Brady Black (Eric Martsolf) arrives at the Dimera mansion, and Gabi Dimera (Camila Banus) informs Brady she is the new CEO of Dimera. Gabi thanks Brady for giving her this idea and explains that with these charges hanging over Stefan, she will get exactly what she wants. Brady doesn’t know that he deserves credit; she did all the work. Gabi is upset with Brady for not giving her a heads up on Nicole’s plan. Brady says he had more to gain with Nicole as CEO. Brady plans to put Dimera Enterprises on it’s but, Gabi disagrees. Gabi threatens to take down Titan just like she did Stefan. Gabi talks to Stefano Dimera’s (Joe Mascolo) portrait and promises to make him proud.

Days of Our Lives Spoilers And Recap – Eli Visits Tony

Days of Our Lives Kristen Dimera (Stacy Haiduk) reveals herself to Ted Laurant (Gilles Marini) and tells him he and Hope have to pay the price. Ted lunges for Kristen’s gun and struggles with Tony Dimera (Thaao Penghlis), the gun goes off, and Ted dies. Kristen says they cannot call the authorities.

Tony wants to know how they are supposed to get rid of the body. Eli knocks on Nicole’s door and Tony answers. Eli needs to speak with Tony and Nicole and asks if he can come into the room. Tony invites Eli in as Kristen is moving Ted’s body. Tony explains that Nicole is “taking out the trash.” Tony invites Eli to come back later, but he declines. Eli tells Tony he is there to put him on notice. Eli congratulates Tony on the wedding. Eli finds it strange that Nicole could move on so easily. Brady comes to Nicole’s room, but Tony is there alone.

Days of Our Lives Spoilers And Recap – Kristen Stages The Scene

Meanwhile Days of Our Lives Kristen puts Ted’s body back in his room as Eli leaves Tony. Kristen sets up the room to look like a botched robbery and take’s the necklace Ted purchased for hope. Kristen plants the gun and exits the room. Stefan comes to talk to Ted and finds him on the floor dead. Stefan looks for an assailant but doesn’t call 911. Kristen is in the park and throws the necklace in the garbage. Hope comes up behind her and picks up money that Kristen dropped as Stefan grabs the gun and points it at Eli.

Days of Our Lives Jennifer Horton (Melissa Reeves) tells Abe Carver (James Reynolds) there is no chance of Jack getting his memory back now. Jennifer explains what Eve Deveraux (Kassie DePaiva) did with the serum and the diary. Jack walks by and doesn’t speak to Abe or Jennifer, and Abe is upset. Abe offers his sympathy for what Eve has done. Jack doesn’t want or need Abe’s sympathy.

Abe tells Jack he’s not worried about his personal life. Abe offers to assist in picking a new commissioner; Jack tells him Eli has accepted the job. Abe tells Jack that Eli is a fine choice for commissioner. Jack says it looks like the slimy politician makes the right choice for once. Jack refuses to let his personal feelings get in the way again. Abe tells Jennifer that part of Jack wants to be the man he used to be.

Keep up with Hollywood Hiccups for all the latest.