Days Of Our Lives Spoilers: Brady Finally Gives In To Fake Nicole 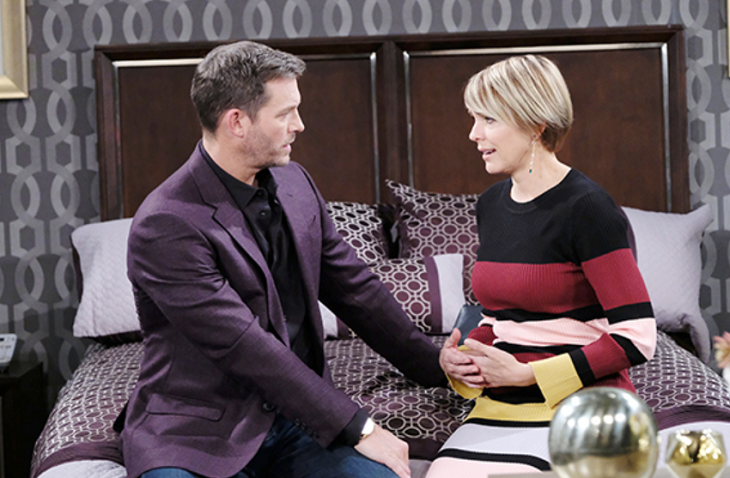 Days of Our Lives spoilers tease that Brady Black (Eric Martsolf) will finally give in to fake Nicole Walker’s (Adrienne Zucker) seductions soon.

Long time Days of Our Lives viewers will recall that Kristen DiMera (Stacy Haiduk) and Brady Black (Eric Martsolf) were engaged at one time. But prior to that, she made quite the rounds of the family, both his side and HER side! In the mid-1990s she had an affair with his father, John Black (Drake Hogestyn) but she had promised her ailing adoptive father Stefano DiMera (Joseph Mascolo) that she would marry Tony DiMera (Thaao Penghlis).

She went through with the marriage, but at that time the real Tony had already been kidnapped and a hostage on an island. So she wound up married to Andre. This took place after Stefano had been presumed dead. That marriage eventually was annulled. It was over 20 years before she first hooked up with Brady and they became engaged. During that same time period however, she drugged and raped Eric Brady (Greg Vaughan) while he was still a priest, causing him to be kicked out of the priesthood. Obviously, the marriage between Kristen and Brady never materialized.

Kristen has obviously done Brady wrong over the years, and he has come to hate her because of it. As Days of Our Lives viewers saw on the Friday, July 26 episode, however, he is still very affected by when he was with Kristen. He told fake Nicole that Kristen and he tried to have children together but were unable to.

Apparently Kristen can carry but cannot conceive a baby. But with everything that Kristen has done to Brady since they were together, there is no way he is going to take her back or become involved with her as herself. That’s the whole reason for her impersonation of Nicole, she thinks Brady will love her if she’s Nicole.

It’s plain to see how desperate Kristen is. Being loved or even just bedded when one’s lover thinks she is someone else is a poor substitute for being loved for herself.

Days Of Our Lives Spoilers – Will Kristen DiMera Ever Be Satisfied?

Even though Brady, likely in a weak moment, gives in to Kristen as Nicole and sleeps with her, will it really solve any problems for Kristen? She will have to demand that they make love in total darkness and make excuses for Brady not to see her body for fear that he will recognize her as Kristen.

She will have to demand that he not touch her face or hair a lot because it may come off and expose her for who she is. And if he does fall in love with her, it will be under false pretenses. What would he do if he fell in love with Nicole and found out she’s really Kristen? His love would turn to hate!