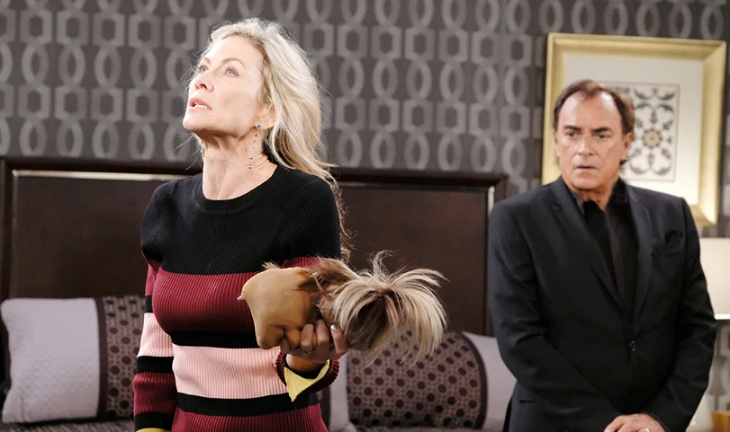 Maggie interrupts Sarah and Xander, and he leaves. Sarah tells Maggie what happened with Rex. Sarah says Maggie should be happy. Maggie tells Sarah she needs to decide if she wants to save this marriage. She tells Sarah that Nicole is never going to forgive Eric.

Maggie says if there is no future for Eric and Nicole, maybe she can be with Eric. Sarah really thought she could make this marriage work. She tells Sarah you can’t force yourself to love someone. Maggie tells Sarah she has two decide who she wants to be with instead of hurting everyone more in the long run. Maggie thinks Sarah needs to take a chance instead of wondering what might have been.

Days of Our Lives Eric walks in the door of his apartment to find Rex waiting for him. Rex thanks Eric for blowing up his marriage. He tells Eric about Sarah’s confession in bed. Rex blames Eric for Sarah marrying him because Eric would never be over Nicole. Rex throws the photo of himself, Eric and Sarah to the floor.

Eric tells Rex he never expected feelings to develop between himself and Sarah. In fact, he thought marrying Rex and Sarah would bring them all closer. Rex tells Eric that he knew Sarah’s vows were a lie, then he punches Eric and thanks him for making his marriage look like a joke.

Rex tries to push Eric into fighting him back and tells him he destroys the lives of the people around him. Eric tells Rex he never meant to hurt him. Rex tells Eric that pain and loss follow him everywhere he goes. Rex says Eric knows how he feels, losing the love of his life.

Days of Our Lives Ted Laurant (Gilles Marini) calls Kate Dimera (Lauren Koslow) for help with Hope Brady (Kristian Alfonso). Kate says it isn’t her problem and hangs up as Hope walks up to her and says hi. Hope asks Kate if that was Ted on the phone. She tells Kate about the confrontation with Ted at his apartment. Hope also tells her about the video coverage not backing up Kate’s story. Hope pushes Kate to find out why Ted is lying to her and Kate warns Hope she is putting her family in danger.

Days of Our Lives Kristen Dimera (Stacy Haiduk) tells Tony Dimera (Thaao Penghlis) that Gabi has to go. Tony asks if she plans to kill Gabi, Kirsten says she has no choice. Tony didn’t see her as a murderer. Tony explains that Nicole will be the number one suspect if Gabi turns up dead. Tony tells Kristen he is there to help her and takes the gun.

Ted stops by “Nicole’s” room, demanding she open the door. Kirsten tells him to go away, but he keeps beating on the door. “Nicole,” tells Ted he is interrupting her wedding night. Ted asks if Nicole married Tony to get leverage over Kristen. He tells Nicole that they are about to get in big trouble with Kristen because Hope is catching on to the plan.

Ted thinks Nicole married Tony for help with Kristen. “Nicole” tries to get Ted to stick to the story if he wants to protect himself and Hope. He threatens to go to the police. Kirsten pulls off her Nicole mask and exposes herself to Ted. Ted tells Tony about Kristen’s threats. Ted begs Nicole to work with him. He grabs the gun, he and Tony struggle and the gun goes off.

Gabi orders Stefan to get out of her house. She tells Stefan this was all a setup and she never got past him framing her. Stefan wants to know how long Gabi has been plotting this. Gabi tells Stefan she’s been planning this all along. Stefan realizes that Gabi made sure Chloe Lane (Nadia Bjorlin) saw them in bed together. He tells Gabi she’s not going to get away with this and that Ben Weston (Robert Scott Wilson) warned him today not to trust her.

Days Of Our Lives Spoilers: Why You Need to Watch Chad And Abby In Paris https://t.co/d3gySkNqjk pic.twitter.com/2bcmAFfGBN

Stefan knows Gabi has feelings for him but she says she needed to marry him to make sure she would never be a victim again. Gabi claims it is a lucky coincidence Nicole pushed him out. Gabi threatens to drag out the divorce if Stefan tries to leave her. Gabi wants Stefan out now. Stefan accuses Gabi of fooling Mr. Shin (Michael Hagiwara) too. Stefan leaves and promises to be back. Stefan tells Gabi he knows she still wants him – she might even love him. He vows he will be back to throw her out on her ass, and she will know that pain of rejection.

As always, more detailed spoilers and a full collection of pictures for the week in question will appear here on Soap Opera Spy, when there could be more clues and hints over exactly what’s going on. Days of Our Lives airs weekdays on the NBC network. Read more news, spoilers, and gossip on our Days of Our Lives homepage.