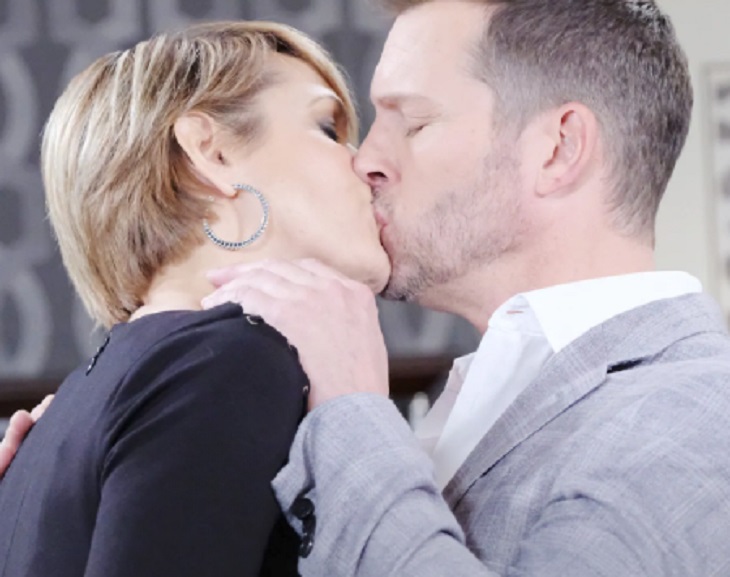 “Days of Our Lives” spoilers for Wednesday, August 7, tease that Stefan DiMera (Brandon Barash) won’t be able to talk his way out of trouble. He just got busted standing over Ted Laurent’s (Gilles Marini) corpse with the murder weapon, so this obviously doesn’t look good. Eli Grant (Lamon Archey) will arrest Stefan with a supportive Jack Deveraux (Matthew Ashford) by his side.

While Stefan’s dragged down to the Salem PD for questioning, Hope Brady (Kristian Alfonso) will grow curious about the woman in the park. Of course, DOOL viewers know that woman is Kristen DiMera (Stacy Haiduk). She dropped a bill that Hope’s trying to return to her, which was one that Kristen stole from Ted’s place.

Kristen may urge Hope to keep it or perhaps she’ll snatch it away without showing her face. Regardless, the necklace could be Kristen’s real problem here. Hope may find it in the garbage can and determine that something fishy’s going on. Once Hope hears that Stefan’s been arrested for Ted’s murder, she should realize this just doesn’t add up.

Days of Our Lives Spoilers – Kristen DiMera Finally Gets Her Way

Other “Days of Our Lives” spoilers say Kristen will finally get what she wants. She’s been dying to get Brady Black (Eric Martsolf) back into bed, so she’ll get her wish on Wednesday. Brady will struggle to resist “Nicole DiMera’s” advances, so he’ll ultimately cave in and sleep with her. “Nicole” should be on cloud nine, but she’ll face plenty more issues as her plot moves along.

Over with Eric Brady (Greg Vaughan), “Days of Our Lives” spoilers say he’ll get a visit from Sarah Brady (Linsey Godfrey). Sarah will assure Eric that her marriage to Rex Brady (Kyle Lowder) is kaput. She’ll explain that Eric’s the only one she wants and profess her love, so he’ll eventually profess his love, too.

Days of Our Lives Spoilers – Kate Roberts Gets A Shock

It sounds like some great bombshells are brewing on the NBC soap. We’ll give you updates as other “Days” news and rumors emerge. Stick with DOOL and don’t forget to check Hollywood Hiccups often for the latest “Days of Our Lives” spoilers, rumors, updates and news.