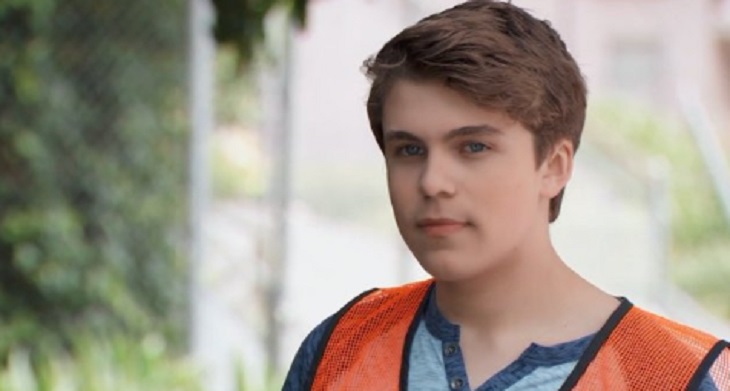 Kim says she has to leave Port Charles now, Julian wants her to stay. Julian tells Kim she won’t just be walking away from ghosts; she will be walking away from him too. Kim says she did find a home here. Kim tells Julian it will be better for him if she goes. Julian tells Kim she doesn’t love him enough to stay in town or ask him to leave town with her. Kim doesn’t want Julian to become a crutch. Kim cannot ask Julian to leave his family for her. Julian wants Kim to be honest with him, would she turn him down if he wanted to leave with her? Julian tells Kim he can visit whenever he wants if Kim wants to be with him; he is willing to follow wherever she leads.

General Hospital’s Neil Byrne (Joe Flanigan) tells Alexis Davis (Nancy Lee Grahn) that he will let her find her therapist. Alexis tells Neil there is a connection between them. Neil thinks they should acknowledge their feelings and move on from there. Neil tells Alexis he knows she hasn’t gotten over her ex-husband yet. Alexis invites Neil to come back inside to talk. Alexis believes she is too damaged for a relationship. Alexis wants Neil’s opinion on whether or not she should be in a relationship. Alexis asks Neil if they want to get to know each other or not, he says they can’t.

General Hospital’s Jocelyn Jacks (Eden McCoy) and Trina Robinson (Sydney McKayla) are helping Cameron Webber (William Lipton) with his community service. Cameron tells them he will get in trouble for them helping. Cameron explains that if he gets this job done early, they will just send him somewhere else. Jocelyn and Trina make a mess in the park to keep Cameron working there. Cameron is glad Trina got Jocelyn out of the house. Jocelyn gets ice cream for the three of them, and Cameron invites her to a movie later. Cameron finds Shiloh kneeling down in the park and asks if he needs help before recognizing who he is. Shiloh kidnaps Cameron for the memory procedure.

General Hospital’s Sonny Corinthos (Maurice Benard) bumps into Michael Corinthos (Chad Duell) and Sasha Gilmore (Sofia Mattsson) at Kelly’s. Sonny invites Sasha over so he can cook her dinner. Sasha leaves for a meeting. Michael tells Sonny that way quick from how are you to a dinner invitation. Sonny says they can get to know Sasha better that way. Sonny tells Michael to watch out, or Carly will try to help because she is eager for Michael to move on from Nelle. Michael tells Sonny about meeting Sandy Lance (Jessica Tuck) in Puerto Rico, but he can’t place her. Drew calls Sonny to alert him to a potential issue with Jason; Sonny and Michael leave to find Jason promising to have him call Drew. Lucy needs Michael and Sonny to get to the DOD house immediately.

General Hospital’s Drew Cain (Billy Miller) and Curtis Ashford (Donnell Turner) realize that Dr. Cabott (Time Winters) is working with Shiloh Archer (Coby Ryan McLaughlin). Drew tells Curtis what Hamilton Finn (Michael Easton) told him about the drugs Cabott picked up from the hospital. Curtis says Shiloh has to come through him to get to Drew. Drew and Curtis realize they have to find Jason. Drew and Curtis try to call Sam and Jason but cannot find either of them. Drew and Curtis arrive at Shiloh’s room and finds blood on the weight Jason used to knock him out with before leaving.

General Hospital’s Jason Morgan (Steve Burton) has Shiloh by the throat trying to get a location on Sam McCall (Kelly Monaco). Shiloh tells Jason that Sam is funning out of air and Dr. Cabott is ready to transfer Drew’s memories into him. Shiloh says Jason can have his memories of Sam or save her life. Jason knocks Shiloh out and goes looking for Sam. Shiloh wakes up on the floor of his room and looks for Jason. Shiloh is furious that Jason is gone and grabs a gun heading out the door. Jason makes it to the DOD house and begs Sam to help him find her. Jason grabs a tire iron and opens the freezer as Lucy calls Michael. Jason calls to Sam, but she doesn’t answer. Jason gets Sam out of the freezer and begs her to open her eyes. Jason performs CPR and revives Sam. Sonny calls Drew to tell him it was Shiloh.

General Hospital’s Peter August (Wes Ramsey) and Maxie West (Kristen Storms) are having lunch at the Metrocourt. Peter tells Maxie he thinks he overstepped with Lulu Falconeri (Emme Rylan) by telling her Dante Falconeri (Dominic Zamprogna) is an idiot. Maxie explains to Peter that Dante believes this is the best thing to do because he doesn’t want to hurt his family. Maxie tells Peter he was right from the start and she was wrong. Maxie apologizes to Peter. Peter and Maxie both feel sorry for Lulu and agree to be there for her. Maxie tells Peter how much he helped her after her husband died. Peter likes thinking about those times until he realized he was falling for Maxie; it was terrifying. Maxie tells Peter it’s a good thing that he feels that way because it means he is all in. Molly speaks to Peter about a job; he may have something for her. Peter wants Molly to do a series on the Cassadines. Molly tells T.J. he is a genius and wants to go home to celebrate. Maxie thinks the Cassadines are a bad choice.

General Hospital’s T.J. Ashford (Tahj Bellow) and Molly Lansing Davis (Haley Pullos) are having lunch. T.J. thinks Molly should be a writer, not a lawyer. T.J. asks Molly if he is totally off base, she says no. Molly thinks she could have been excited about the DOD storyline because of Kristina Corinthos-Davis (Lexi Ainsworth) involvement. Molly argues she could be out of school in three years, and they could play off their loans. T.J. wants Molly to pitch herself to Peter as an intern.

General Hospital’s Lucy Coe (Lynn Herring) is outside the DOD house complaining because the pickup crew has not arrived to haul off garbage. Little does Lucy know that Sam is in the freezer located in the junk. Lucy is told the truck is on the way and promises to give the crew a bonus. Sasha arrives to look at the house, and Sam still is not noticed. Lucy encourages Sasha to rent this house off Michael. Lucy wants Sasha to be a model and wants to relaunch her cosmetics company.