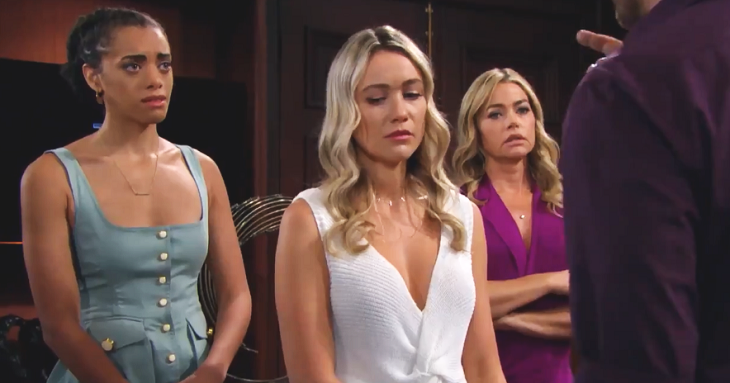 They’re completely floored that Beth Spencer (River Davidson and Madeline Valdez) is alive and well, and that she was illegally adopted by Steffy Forrester (Jacqueline MacInnes Wood).

As B&B viewers know, Ridge has just placed a call to the police asking them to track down and arrest Reese Buckingham (Wayne Brady) for stealing Beth Spencer (River Davidson and Madeline Valdez), and it might not be long before he calls the cops on Flo, Shauna, and Zoe, too. But little do Brooke and Ridge know that there are some more very disturbing details for them to learn.

Bold And The Beautiful Spoilers – Thomas Forrester’s Involvement In Secret

One thing they haven’t heard about yet is how Thomas Forrester (Matthew Atkinson) learned the secret about Beth, kept it from Hope Logan (Annika Noelle), and threatened the others to keep the secret. When Brooke and Ridge find this out, it’s going to cause a serious divide between them. It looks like they might find out about Thomas on Thursday’s episode, since B&B spoilers indicate that Bridge will continue to grill Flo, Shauna, and Zoe.

Bold And The Beautiful Spoilers: Hope And Liam Blissful In The Beth Reveal Afterglow https://t.co/sxN2qLeouk pic.twitter.com/41NZuwY8Kv

Meanwhile, on Thursday’s new episode of B&B, Hope and Liam Spencer (Scott Clifton) are going to have a formidable task in front of them. They’ll have to tell Steffy the remarkable story of how “Phoebe Forrester” is in fact their daughter Beth. As B&B viewers know, Steffy’s been away from the house, but she’ll return to find Hope and Liam waiting for her.

B&B viewers should expect some emotional scenes as Hope and Liam tell Steffy that the little girl she’s been raising for moths was actually stolen from them at birth and illegally adopted to her. They’ll explain how Reese Buckingham (Wayne Brady) set the whole scam in motion, swapped babies in the Catalina clinic, and then arranged for Flo to pose as “Phoebe’s” birth mom.

Bold And The Beautiful Spoilers – Steffy Forrester Is Stunned And Horrified

Steffy will be stunned and horrified by what she hears, and she’ll likely resist the truth – after all, she’ll be slowly realizing that if what Hope and Liam are saying is true, then she will lose her daughter. Steffy will surely have a lot of questions, and Hope and Liam will have answers to them all. In the end, Steffy will be devastated to learn that what Douglas Forrester (Henry Joseph Samiri) was claiming is actually true.

Steffy will probably be especially disturbed to hear about her brother’s role in this whole mess. Ultimately, though, there won’t be anything she can do about it, and she’ll be absolutely overcome with disbelief and grief.

Of course, Liam will be heartbroken to tell Steffy that her daughter never really existed, and he’ll find himself torn between Hope, who is joyous over her daughter being alive, and Steffy, who will be devastated that “Phoebe” is going to be taken from her.