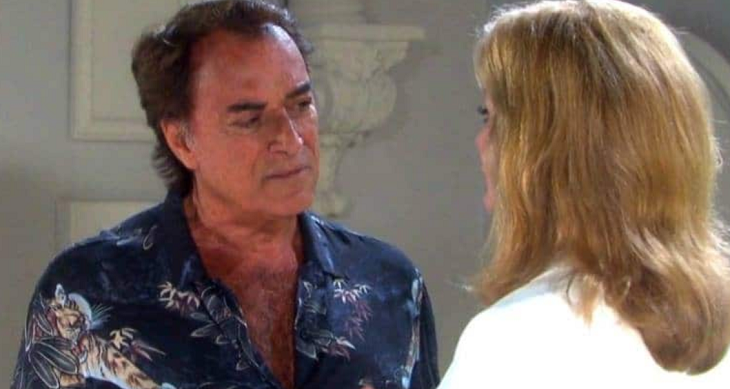 Days of Our Lives spoilers tease that soon Dr. Marlena Evans (Deidre Hall) will find out that Tony DiMera (Thaao Penghlis) is alive and reunite with him in an upcoming episode.

Days of Our Lives viewers will recall several months ago when Marlena was poisoned with penicillin injected into macarons by Diana Colville Cooper (Judith Chapman), who was jealous over Marlena’s husband, John Black (Drake Hogestyn).

Having been involved with him over twenty years ago, and she wanted him back and thought by killing Marlena, John would turn to her! As a result, Marlena flat-lined for what seemed to be a long time, and had an out-of-body experience in a place between Heaven and Hell, where both Andre and Tony DiMera (both played by Thaao Penghlis) was, along with Princess Gina Van Amberg (Kristian Alfonso), who was a doppelganger of Hope Brady.

Days of Our Lives Spoilers – Marlena Evans Will Begin To Wonder

Marlena’s soul was competed for by the forces of both Heaven and Hell, and ultimately, although Andre kept impersonating Tony and trying to trick Marlena into the door to Hell.

Tony finally emerged and helped her get through the door back to neither Heaven nor Hell, but back to her life on earth, similar to Caroline Brady (Peggy McKay) having sent Will Horton (Chandler Massey) back to earth because it was not his time to die in a more recent episode of Days of Our Lives.

Marlena will undoubtedly tell her old friend Tony about this out-of-body experience and ask him how long he has been alive!

The question of when Tony was resurrected compared to when Marlena had her out-of-body experience, assuming it was real and not a dream, is a very good one if Tony truly was the one to rescue Kristen DiMera (Stacy Haiduk) from the warehouse explosion where Jack Deveraux (Matthew Ashford) and Xander Kiriakis (Paul Telfer) also escaped, and where the real Nicole Walker (Adrienne Zucker) was presumed to have died.

It would make more sense, given Xander was married to her at the time, for him to have rescued Nicole if she is indeed still alive, or he could have even moved people from the rooms at the warehouse with initials on them to a different facility, which may have given him a reason to rescue Dr. Wilhelm Rolf’s (William Utay) diary with all the formulas including the resurrection formula.