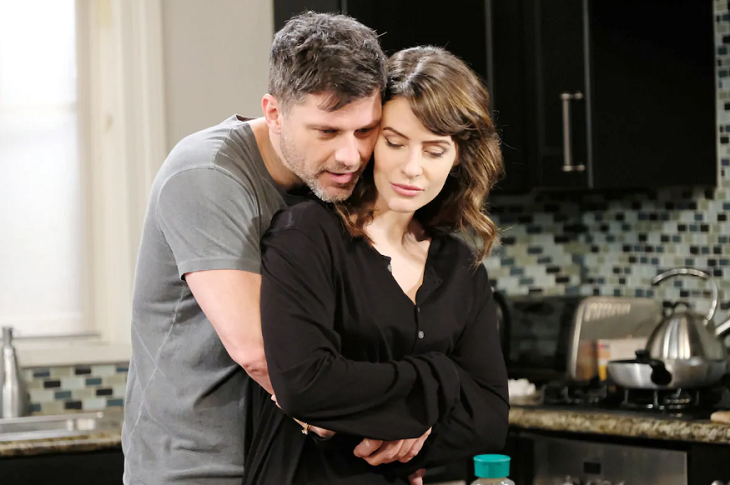 Days of Our Lives (DOOL) recap for Wednesday, August 7, 2019, reveals Xander Cook (Paul Telfer) joins Rex Brady (Kyle Lowder) at the bar and orders another drink. After Rex and Xander both get drunk, they leave the bar together.

Kate Dimera (Lauren Koslow) arrives and thinks Xander is trying to hurt Rex. Rex tells Kate that Xander is a great drinking partner. Xander goes home and talks to Maggie Kiriakis (Suzanne Rogers) about his time with Rex. Xander wants Maggie to put in a good word for him, but she declines.

Xander drunkenly tells Maggie that Nicole isn’t really Nicole. He says he means Nicole isn’t acting like herself. Xander says the real Nicole loves Eric and if she returns, Sarah will be left out in the cold. Maggie wants Sarah to follow her heart. Maggie brings Xander ice cream to share.

Days of Our Lives Eric Brady (Greg Vaughan) is cleaning up after Rex’s visit when Sarah Brady (Linsey Godfrey) show up. Sarah sees Eric’s face and asks if Rex did that. Sarah apologizes and says she shouldn’t have invited Eric to dinner. Eric says this wasn’t about dinner and they discuss what happened between herself and Rex. Sarah gives Eric a cold compress for his face.

Days of Our Lives Spoilers: Should Rafe and Hope Reunite After Ted’s Death? https://t.co/BQwTX2170I pic.twitter.com/nxBTeYIz20

She is tired of hiding her feelings; she’s completely honest about what is in her heart. Sarah tells Eric she loves him. Eric tries to pull away, but Sarah as to tell him how she feels. Sarah begs Eric to be honest with her about his feelings. Eric touches Sarah’s face and pulls her into a kiss. Eric tells Sarah that after Nicole died, he never thought he could fall in love again. He then says he loves her. Sarah leads Eric to the bedroom. Eric lights candles and he and Sarah make love.

Days of Our Lives Brady Black (Eric Martsolf) shows up at Nicole Walker’s (Arianne Zucker) room. Tony DiMera (Thaao Penghlis) demands to know what Brady’s intentions are with his wife. Brady tells Tony he has no intention of hurting Nicole, who comes back to the room. Brady tells Nicole that Gabi DiMera (Camila Banus) has been named CEO of Dimera.

Nicole says she wants him and asks why they can’t be together. Brady and Nicole start to kiss. Nicole sends a text to Tony telling him to stay away until she calls him. Nicole and Brady move to the bed and Brady lays on it. Nicole claims not to want Brady to see her scars and turns off the lights.

Days of Our Lives Hope Brady (Kristian Alfonso) tries to give Kristen DiMera (Stacy Haiduk) back the money she dropped, but Kristen runs away. Tony leaves the hotel room to give Brady and Nicole time to talk. Tony walks through the square and runs into Kate who faints in his arms. Kate and Tony talk about his death and his return.

Kate wishes Andre DiMera (Thaao Penghlis) had cared about her as Tony does about Anna Dimera (Leann Hunley). Tony tells Kate the story he and Kristen put together about Nicole. Tony offers to buy Kate a drink, and she accepts. Hope approaches Tony and Kate. Hope tells Kate that Ted is dead. Hope tells them Stefan has been arrested for Ted’s murder.

Days of Our Lives Eli Grant (Lamon Archey) brings Stefan Di<era (Brandon Barash) to the police station. Stefan is taken to booking as Eli calls Hope to come to the station. Hope arrives at the police station and thinks Eli wants to tell her about his new job. Eli tells Hope that Ted has been murdered. Stefan is brought back into the room, and Hope accuses him of killing Ted. Eli wants to know when Hope last saw Ted. Hope tells Eli about the money she discovered at Ted’s apartment and ending their relationship. Stefan tries to convince Eli that he is being framed again and tells him Nicole is behind it.