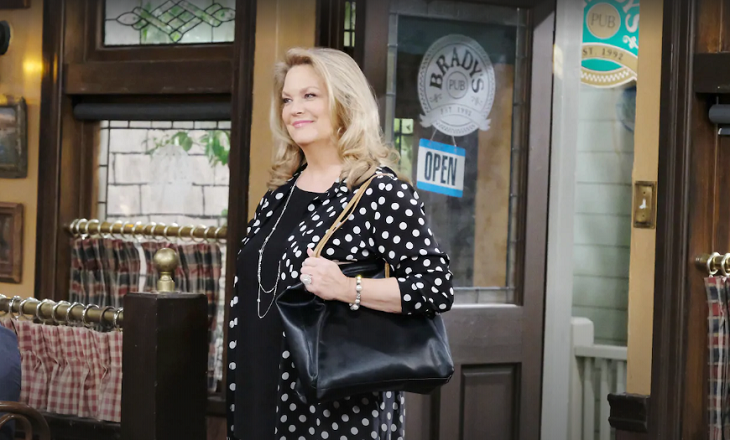 “Days of Our Lives” spoilers for Thursday, August 8, tease that Stefan DiMera (Brandon Barash) will feel like his world’s falling apart. First, Stefan was accused of two kidnappings he didn’t commit.

Fortunately, Stefan will still have someone in his corner on Thursday. He may be surprised when Gabi shows up at the police station to defend him. Gabi may claim she only wants revenge, but it’s easy to see she has genuine feelings for Stefan. Once she realizes Stefan’s been accused of Ted Laurent’s (Gilles Marini) murder, Gabi just won’t believe Stefan’s the guilty party.

While Gabi stands by her husband, “Days of Our Lives” spoilers say Hope Brady (Kristian Alfonso) will make a shocking find. She’ll stumble across something that leaves her puzzled, so it might be the necklace Kristen DiMera (Stacy Haiduk) got rid of. This could be Hope’s first solid clue that everything isn’t as it seems to be.

DOOL fans can expect Hope and John Black (Drake Hogestyn) to team up on an investigation next week. In the meantime, Kristen DiMera (Stacy Haiduk) will mull over a big decision. After that hot sex session with Brady Black (Eric Martsolf), “Days” spoilers say Kristen will consider making a confession. She’ll wonder if she should reveal her true identity to Brady and trust their deep bond will carry them through.

However, that’s obviously a terrible idea. Brady surely wouldn’t forgive Kristen for faking Holly Jonas’ (Harlow and Scarlett Mallory) death and destroying her loved ones with grief. Likewise, Brady wouldn’t be happy that Kristen used “Nicole” to get him into bed. Kristen will eventually realize that and ditch her admission plans for now.

Finally, “Days of Our Lives” spoilers say Anna DiMera (Leann Hunley) will make her way back to town. She’ll want some answers from Tony DiMera (Thaao Penghlis), who suddenly returned from the dead and married Nicole.

It seems Tony will try to avoid Anna initially, but she won’t give up. Anna will be riled up and quite nosy, so Tony and Kristen will have a serious threat on their hands.

It looks like some great scenes are coming up. We’ll give you updates as other “Days” news and rumors emerge. Stick with DOOL and don’t forget to check Hollywood Hiccups often for the latest “Days of Our Lives” spoilers, rumors, updates and news.