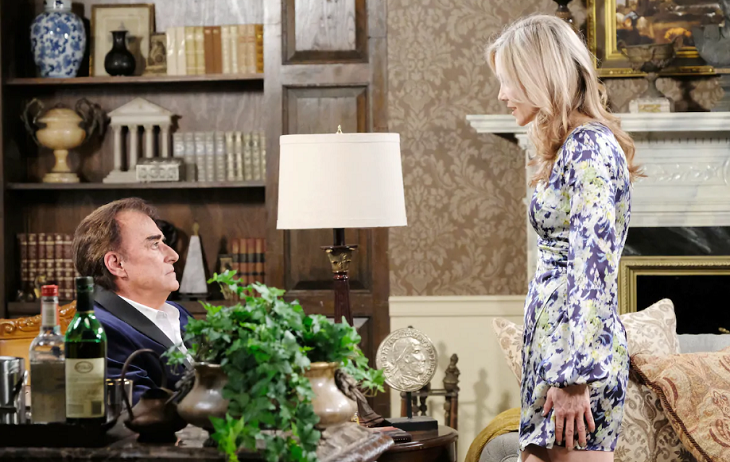 “Days of Our Lives” spoilers for Friday, August 9, tease that Brady Black (Eric Martsolf) will open up to Chloe Lane (Nadia Bjorlin). There’ll be a lot to talk about since Brady’s reconnecting with “Nicole DiMera” (Arianne Zucker), but he can’t get Kristen DiMera (Stacy Haiduk) off his mind. Brady’s brain obviously senses this is Kristen on some level, but he’d never imagine it was even possible.

Instead, Brady just thinks “Nicole’s” changed due to what she’s been through. As for Kristen, Brady probably can’t wrap his head around why he wants her.

He may admit his feelings to Chloe and get some advice in return. Kristen is dead and gone as far as Brady’s concerned. Chloe might suggest Brady should focus on what’s right in front of him, but that’s far more complicated than he knows!

“Days of Our Lives” spoilers state that Roman will just want what’s best for all of them. Of course, Rex believes what’s best is to leave town. He just quit his job at the hospital, so he’ll indeed be leaving Salem on Friday. Before Rex goes, he’ll basically warn Sarah that Eric’s always going to love Nicole. Rex may think Sarah’s going to regret choosing a man who’s hung up on another woman.

Next, Gabi DiMera (Camila Banus) will spar with Stefan DiMera (Brandon Barash) as she struggles to face her feelings. She’s clearly in love with Stefan, but she can’t quite let go of her plan to destroy him. However, some DOOL gamechangers are coming up in the week ahead. “Days of Our Lives” fans won’t want to miss what’s in store for “Stabi.”

Finally, Friday’s episode will bring Anna DiMera’s (Leann Hunley) surprising mission. She’ll be back in town to put Tony DiMera’s (Thaao Penghlis) ashes to rest in the DiMera mausoleum, but she’ll face a couple bombshells instead. Tony certainly isn’t in that urn – he’s alive and married to Nicole!

Days of Our Lives Spoilers: How Will Brady React When He Learns Nicole Is Actually Kristen DiMera? https://t.co/kuK4YOU08n pic.twitter.com/oVkz4QIVLT

Anna will have a flood of emotions to deal with soon enough. As for Tony, he’ll go to Kristen and demand the end of their marriage. It sounds like Kristen will have another crisis on her hands.

We’ll keep you posted as other “Days” news and rumors emerge. Stick with DOOL and don’t forget to check Hollywood Hiccups often for the latest “Days of Our Lives” spoilers, rumors, updates and news.