The Bold and the Beautiful Spoilers: Friday, August 9 – Zoe And Flo Face Ridge’s Wrath – Hope And Steffy Argue Over Beth 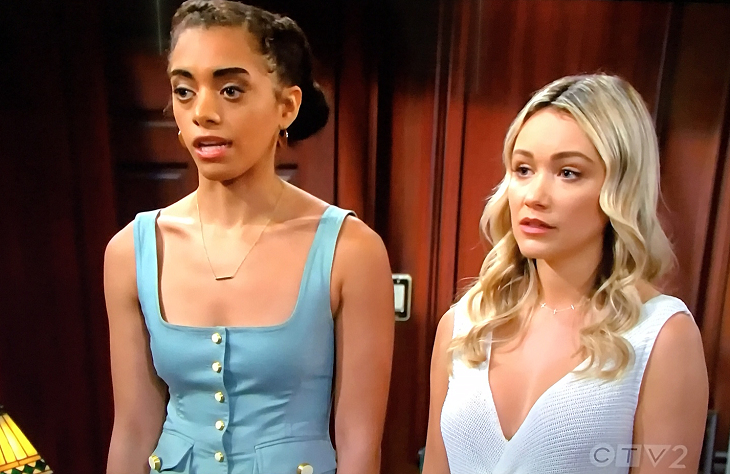 The Bold and the Beautiful spoilers for Friday, August 9, tease that Ridge Forrester (Thorsten Kaye) won’t be through with Zoe Buckingham (Kiara Barnes), Shauna Fulton (Denise Richards), and Florence “Flo” Fulton (Katrina Bowden). As B&B viewers know, he’s just confiscated their drivers’ licenses and has vowed to make them pay for the lives they’ve ruined with their lies and deception.

Of course, Ridge is particularly upset that Flo and Zoe just disclosed his son Thomas Forrester’s (Matthew Atkinson) involvement in the big secret about Beth Spencer’s (River Davidson and Madeline Valdez) identity. Ridge didn’t want to believe that his son could do the things that Zoe and Flo were accusing, and it looks like he’ll continue to believe that they’re lying.

On Friday’s episode of B&B, look for Ridge to rail against Zoe and Flo in particular for what they’ve done. He’ll probably get even angrier with them if they decide to tell him the rest of the story about Thomas – that is, that he chased Emma Barber (Nia Sioux) down in his car and contributed to her fatal car accident. Ridge probably won’t want to believe that, either.

Of course, Ridge is upset over how Zoe and Flo destroyed Hope Logan’s (Annika Noelle) life for so many months, but he’s going to be particularly preoccupied by how his own daughter Steffy Forrester (Jacqueline MacInnes Wood) is going to suffer now that she knows that “Phoebe Forrester” is actually Beth. And he’ll make sure Flo and Zoe pay the price for what they did.

Meanwhile, on Friday’s new episode of B&B, at the cliff house, Steffy will reel from hearing the news that Hope gave birth to the little girl she’s been raising as “Phoebe.” She’ll feel absolutely gutted as the truth sinks in and she’s able to process the fact that the child she adopted was stolen from Hope and Liam Spencer (Scott Clifton).

Look for Steffy to fight the truth, as her mind resists coming to grips with the fact that her daughter isn’t really her daughter. Her maternal instincts will probably kick in and she’ll look to protect “Phoebe” from being taken from her. But another part of her will know that Hope and Liam wouldn’t lie to her about something so important, and so she’ll be completely destroyed.

It won’t be long before Brooke Forrester (Katherine Kelly Lang) and Ridge head over to Steffy’s house. Brooke will naturally want to reunite with Hope and see her granddaughter Beth. And Ridge will want to be there to support Steffy during one of the most difficult times of her life.

Bold And The Beautiful Spoilers – Forrester And Logan Families Will Divide

B&B viewers should look for some tense moments, as Ridge supports Steffy and Brooke supports Hope. It looks like this will be the beginning of a major Forrester/Logan divide, as everyone realizes that decisions have to be made about what to do next. There’s a baby involved here, and Hope will naturally want to take her daughter home.

The Bold and the Beautiful spoilers say that Steffy and Hope will ultimately argue about the best way to handle the situation with Beth. Surely, Steffy will realize that she’s going to have to let Hope take Beth, but she may not think that Hope should take Beth right away.

Bold And The Beautiful Spoilers: Hope And Liam Blissful In The Beth Reveal Afterglow https://t.co/sxN2qLeouk pic.twitter.com/41NZuwY8Kv

At at any rate, it looks like Hope and Steffy will disagree about what’s best, and their parents will divide, each supporting their own daughter. Hopefully, they’ll be able to reach a consensus on how to make the transition the least disruptive to Beth, and to their family harmony.