Days of Our Lives Spoilers And Recap Friday, August 9: Tony Wants To End His Marriage; Anna Arrives In Salem 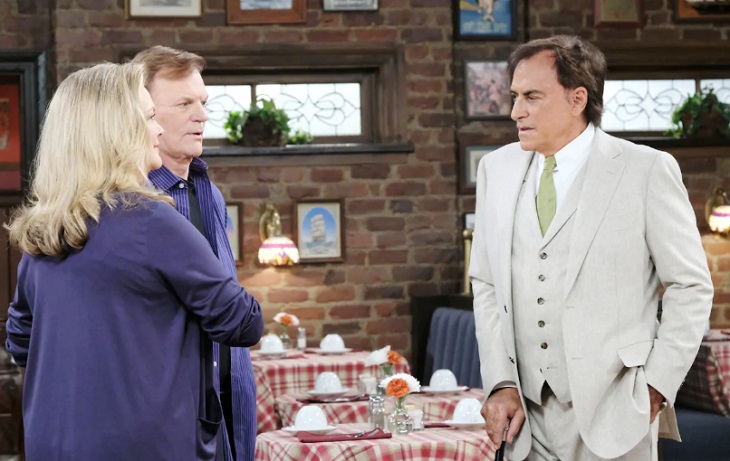 Days of Our Lives Spoilers And Recap – Stefan Is Released

Stefan tells Gabi he’s not going to prison and her getting rid of him. Stefan tells Gabi she was a distraction; he will take back everything and will grind her to dust. Gabi wants to know what Stefan was about to say when he stops himself; he says it doesn’t matter. Stefan tells Gabi he can still get to her, she jerks her hand out of his and tells him she is upping security.

Days of Our Lives Spoilers – Roman Rakes Eric Over The Coals

Days of Our Lives Sarah Brady (Linsey Godfrey) tells Eric Brady (Greg Vaughan) that she wants to be with him. Sarah doesn’t want to go to work and see Rex Brady (Kyle Lowder). Eric wants Sarah to take the day off and give Rex some time. Eric offers to go to work with Sarah, she declines and opens the door to find Roman Brady (Josh Taylor) standing there. Roman says it looks like Eric and Sarah have set up housekeeping. Eric tells Roman that Rex has been there and knows about them. Sarah will do whatever she can to make this easier on Rex. Roman advises Eric to wait for Nicole; he is stunned. Roman accuses Eric of being with Sarah because he can’t have Nicole.

Days of Our Lives Rex sends a text to Kate Dimera (Lauren Koslow) and Roman saying he needs to talk to them. Chloe Lane (Nadia Bjorlin) arrives and tells Rex about Ted Laurant’s (Gilles Marini) and that he is dead. Rex tells Chloe about Sarah and Eric and that he is leaving Salem. Rex doesn’t want to work with Sarah or be in the same town with his brother. Chloe and Rex are going to miss each other, and they hug. Roman joins Rex at the pub and tells him he knows what happened.

Kate joins the two of them. Roman and Rex tell Kate everything that has happened. Kate wants Rex to call Kayla back and tell her he changed his mind. Rex tells Kate and Roman he is leaving town. Rex is going to be with his daughter, Roman understand, Kate doesn’t. Roman and Kate agree to meet him for a baseball game next week. Kate and Roman hug after Rex leaves. Rex runs into Sarah and Eric before leaving. Anna Dimera (Leann Hunley arrives outside the pub.

Rafe says it stands to reason that whoever threw the Nicole away killed Ted. Hope says, or they know who did. Rafe tells Hope she needs to turn the necklace over to Eli Grant (Lamon Archey). Hope wants to tell this story to Rafe. Hope tells Rafe how she tricked Ted and searched his room. Rafe talks about Gabi defending Stefan, and they both hope it works out for her. Hope tells Rafe that Gabi may be right. Hope doesn’t believe Stefan killed Ted either. Rafe and Hope agree that Stefan is telling the truth and Ted was lying. Stefan approaches Hope who tells him she believes him and has an idea who killed Ted.

Days of Our Lives Kate demands to know if Tony Dimera (Thaao Penghlis) is working with Nicole Walker (Arianne Zucker) and Kristen Dimera (Stacy Haiduk). Tony tells Kate if he wanted Dimera, he would have run it himself. Kate tells Tony he is in the middle whether he wants to be or not. Tony is furious with Kristen over her tryst last night and tells her about his conversation with Kate. Tony says things are closing in on them. Tony wants out of his marriage, Kristen can have Brady, and he can go back to Anna.

Days of Our Lives – Brady Talks To “Nicole” About Kristen

Days of Our Lives Brady Black (Eric Martsolf) is lying in bed thinking about Kristen as “Nicole” comes out of the shower. “Nicole,” thinks they should be completely honest with each other. Brady tells Nicole to go first. Brady offers to go first and says he would never hurt Nicole. Nicole knows her place is there with him.

Brady says being with her has been amazing, but as soon as she left the bed, he started thinking about Kristen. Nicole says Brady must still have feelings for Nicole. Nicole tells Brady you always want a chance to make things right. Tony interrupts and wants to speak to his wife. Kristen tells Tony she was about to tell Brady the truth. Brady tells Chloe he slept with Nicole last night.

Keep up with Hollywood Hiccups for all the latest news and spoilers.