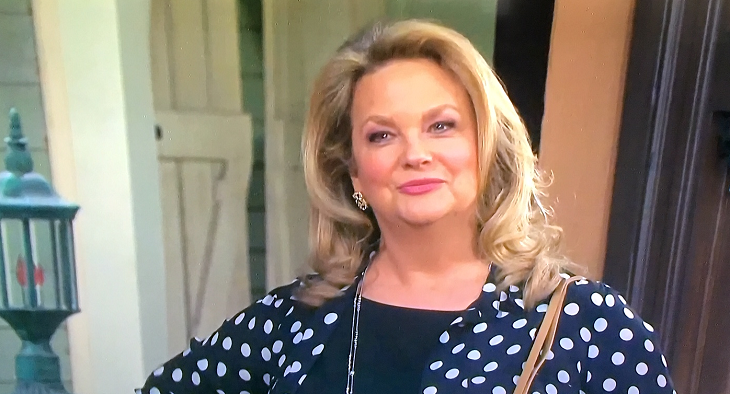 “Days of Our Lives” spoilers for Monday, August 12, tease that Kate Roberts (Lauren Koslow) and Roman Brady (Josh Taylor) will have some big news to pass along.

They’ll likely assume Anna DiMera (Leann Hunley) is back to confront Tony DiMera (Thaao Penghlis), but she has a different goal in mind. Anna still believes Tony’s dead and gone. She’ll hope to put Tony’s ashes to rest in the DiMera mausoleum.

DOOL fans can expect some shocking moments for Anna on Monday. She’ll be floored when Roman and Kate reveal that not only is Tony alive – he’s married to “Nicole Walker” (Arianne Zucker)!

“Days of Our Lives” spoilers say Anna will have plenty of questions. She won’t understand why Tony would betray her like this. Anna thought they had a special connection, but she’ll find herself doubting that soon enough.

Of course, Anna won’t have the whole story. Tony truly wants to reunite with Anna, but he’s trapped in this marriage mess with Kristen DiMera (Stacy Haiduk). He’ll remain stuck since Kristen will threaten Anna’s life, but he’ll run into his true love in the meantime. “Days of Our Lives” spoilers say Tony will come face-to-face with Anna in Monday’s exciting episode.

Over with Chloe Lane (Nadia Bjorlin), she’ll reach out to Marlena and express concern for a friend. At least she’ll believe it’s for a friend! Chloe has no idea that Kristen is posing as “Nicole,” so she’ll remain concerned about her.

“Days” spoilers say Chloe will push Marlena to help. She’ll think “Nicole” could stand to talk to a professional, so she’ll urge Marlena to step up here.

Marlena will go along with the suggestion, but this plan will quickly go awry. Speaking of plans that go awry, let’s talk about some anniversary party confusion. Marlena will hope to surprise John Black (Drake Hogestyn) with a big shindig featuring all their loved ones. She won’t realize John has the same thing in mind, so guest list chaos will ensue. They’ll be planning surprise parties for each other!

Days Of Our Lives Spoilers: Kristen Not Giving Up On DiMera Enterprises – Another Major Showdown Coming With Gabi https://t.co/zeahT4cbQz pic.twitter.com/LZO5vN2oAa