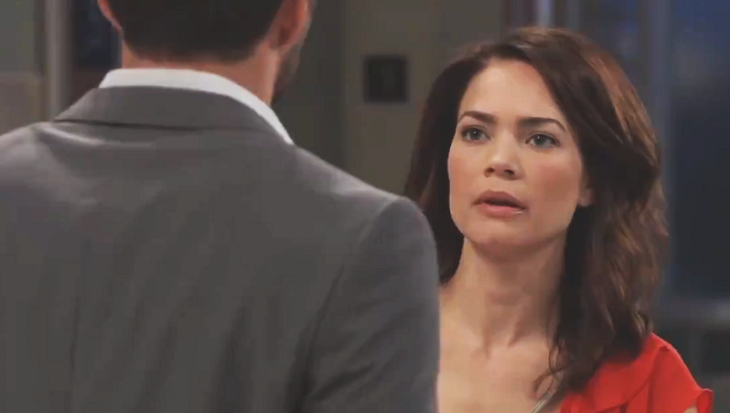 General Hospital (GH) recap for Friday, August 9, 2019, reveals Peter August (Wes Ramsey) stops by Crimson to visit with Maxie West (Kirsten Storms) who tells him the events of the day. Peter flirts with Maxie, but she has to work.

Robert Scorpio (Tristan Rogers) shows up and blames Peter for Dante Falconeri’s (Dominic Zamprogna) relapse. Robert urges Maxie to get away from Peter before it’s too late. Maxie apologizes to Peter for Robert’s reaction. Peter doesn’t blame Robert and Maxie defends Peter, she has accepted him. Lulu arrives, and Peter leaves them to talk. Lulu doesn’t want a divorce; this will be on Dante.

General Hospital’s Robert meets with Lulu Falconeri (Emme Rylan) and tells her he has news about Dante. Robert tells Lulu that Dante suffered a major setback and had to be moved to another facility. Robert tells Lulu that all deprogramming has been postponed to keep Dante from hurting himself or others. Lulu thanks Robert for looking out for Dante. Robert leaves and Lulu breaks down.

Willow Tait (Katelynn MacMullen) joins Lulu who wants to tell her about the dangers of loving a man who is attracted to danger. Willow listens as Lulu tells her how hard it is to be with a cop. Lulu would marry Dante all over again. Lulu wants to interview Willow for the Invader. Willow talks to Lulu off the record. Lulu has to leave, and Willow promises to contact her if she changes her mind. Willow gets a text from Chase saying he is at the hospital.

General Hospital’s Cameron Webber (Michael Leone) cries as Shiloh Archer (Coby Ryan McLaughlin) makes him watch Dr. Cabot (Time Winters) inject Franco Baldwin (Roger Howarth) with the drug to do the memory transfer and hooks him up to the computer to receive Drew’s memories. Curtis and Drew burst in with guns. Drew punches Shiloh and Curtis holds him as Drew holds a gun on Dr. Cabot. Later Cameron tells Drew that Cabot had no right to mess with him and Franco’s minds.

General Hospital’s Harrison Chase (Josh Swickard) arrives at the hospital and accompanies Liz Baldwin (Rebecca Herbst) to the warehouse where Franco and Cameron are being held. Shiloh is arrested, and Dr. Cabot is in cuffs. Drew wants to get the equipment off Franco, but Cabot warns them it could hurt him. Dr. Cabot is taken to jail; he tells Drew that his attorney will be in touch.

Willow arrives at the hospital and runs into Shiloh, who is taken out in cuffs. Robert joins Curtis who tells him they have to wait from Franco to wake up. Cameron rushes out and tries to attack Shiloh. Willow overreacts to Chase’s message. Chase smiles and Willow accuses him of making her feel stupid. Drew explains to Cameron that he stopped him because assault is a crime. All Cameron could think about is how Shiloh took Franco away from him. Drew wants to get back at Shiloh too.

General Hospital’s Liz, Cameron, and Drew make it to the hospital. Lucas Jones (Ryan Carnes) assures Liz that they are testing Franco to make sure he is OK. Chase wants Cameron to give his statement while everything is fresh in his mind. Drew tries to reassure Liz that Franco will be fine. Lucas is sent to a cubical, and Shiloh is the patient. Shiloh goes on about his son and how much he looks like his mother. Lucas sews up Shiloh and tells him he is ready to go.

Cameron tells Liz that Franco saved him and that he said he loves her and will be back. Franco is brought back into the room and Drew sets with him until Liz arrives. Cameron talks to Drew outside and tells him Shiloh and Cabot want information that Drew knew before. Liz begs Franco to come back to her. Cameron blames himself for not running away. Liz is proud of Cameron and Franco. Lucas tells Liz that Franco brain function is normal, but they won’t have answers until he wakes up.