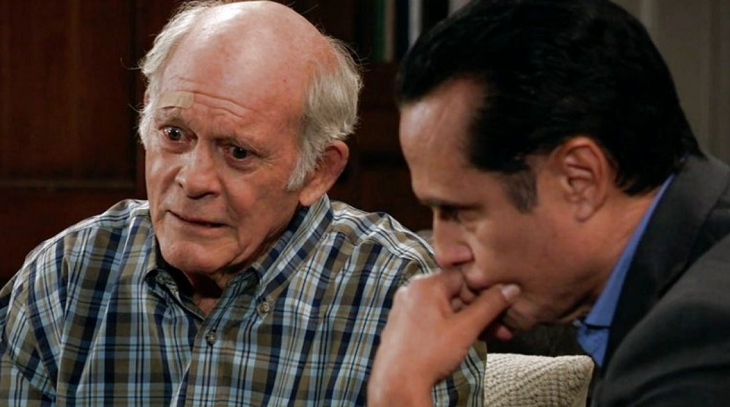 General Hospital spoilers tease that Sonny Corinthos (Maurice Benard) will share a tender moment with his father, Mike Corbin (Max Gail). He will realize how short life can be, and he needs to make the most of every moment he has left with his dear old Dad.

General Hospital viewers know that Sonny will have several adverse situations that have gone on around him and his life lately. His stepdaughter Josslyn Jacks’ (Eden McCoy) boyfriend Oscar Nero Quartermaine (Garren Lake Stitt) died at only 16. His oldest son Dante Falconeri (Dominic Zamprogna) developed post traumatic stress disorder and is being treated for it and for brainwashing.

Jason Morgan (Steve Burton) nearly lost Sam McCall (Kelly Monaco) when Shiloh Archer (Coby Ryan McLaughlin) trapped her in a freezer. Michael Corinthos (Chad Duell) worries about his girlfriend, Sasha Gilmore (Sofia Mattsson) who is in bad shape at General Hospital. And then there is the situation with Franco Baldwin (Roger Howarth) possibly being in a vegetative state, thanks again to Shiloh. Sonny doesn’t particularly care for Franco, but it’s still a reminder that anything can happen, and no one is promised tomorrow!

Mike himself might be thinking the same as Sonny, even though he has been since he started his Alzheimer’s journey. He may be thinking that way even more now, as he “marries” his Turning Woods sweetheart, Yvonne Godfrey (Janet Hubert) in a small ceremony at the memory care home they both live in now.

Sonny and likely Carly Corinthos (Laura Wright) will share that very special event with Mike at Turning Woods, and Michael may break away from Sasha and GH long enough to attend. Kristina Corinthos-Davis (Lexi Ainsworth) and Josslyn may attend as well, and perhaps little Avery Jerome-Corinthos (Ava and Grace Scarola) will be the flower girl.

Of course, as General Hospital viewers know, this will not be a legal marriage, since Yvonne is still legally married to Marcus Godfrey (Nigel Gibbs). But since both Yvonne and Mike are so far advanced in their Alzheimers’ journeys, the Corinthos family and Marcus are humoring the couple.

Sonny undoubtedly thinks about life’s curve-balls when he considers the baby that he and Carly are expecting, which could be born having very special needs. The closer the birth gets, the more he may worry that something will go drastically wrong, although he’s keeping it to himself.

Sonny obviously doesn’t want Carly to know he’s worrying, because that will put more stress on her and their baby. They already know the baby will have spina bifida, an in-utero malformation of the spine where it doesn’t completely fuse and some will be in a sac on the outside of the body.

They will have a better idea of how severe it will be after Carly’s next ultrasound. All of these issues will make Sonny realize how precious life is, and especially his father’s, whose life continues to slip away bit by bit!