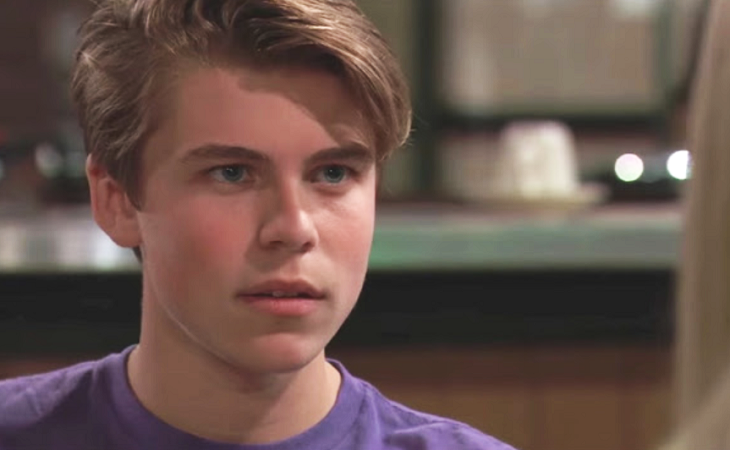 Some General Hospital fans seem to be confused about that parentage of Liz Baldwin’s (Rebecca Herbst) children. With only one of their fathers on screen, it is easy to get confused, especially if you weren’t watching GH when the kids were born. Here is the breakdown of the kids and their fathers.

General Hospital’s Aiden Spencer (Jason David) belongs to Liz’s ex-husband Lucky Spencer (Jonathan Jackson). Lucky was the person who helped Liz after her rape when she was a teenager. Liz and Lucky had an on again off again relationship for years.

When Aiden was conceived, Liz was also having an affair with Lucky’s brother Nikolas Cassadine (Tyler Christopher). Helena Cassadine changed the paternity results and made everyone believe Nik was Aiden’s father. Aiden true paternity was discovered by Liz the night Jake was supposedly killed in front of her house. Liz was reading the paternity test when Jake slipped out the door.

General Hospital’s Jake Spencer (Hudson West) was conceived while Liz was married to Lucky. Lucky was addicted to drugs, and Liz went to visit Jason Morgan (Steve Burton) during a blackout. Jason was drunk at the time, and he and Liz slept together. Liz lied for months, saying Jake belonged to Lucky.

When the truth finally came out, Liz asked Jason to let Lucky raise Jake because he would be safe with Lucky as his father. If it were known that Jason was Jake’s father, Liz claimed he would be in danger from the mob, and Jason agreed.

At the time Jake was kidnapped and taken to Cassadine Island, Jake had no idea that Jason was his father. Jake discovered the truth when he overheard Liz and Laura Webber (Genie Frances) talking about his parentage after he returned home.

General Hospital’s Zander Smith (Chad Brannon) worked for a mobster and sold drugs to young kids. Zander kidnapped Emily Quartermaine (Natalia Livingston), and they fell in love while on the run.

Emily fell in love with Nikolas, and Zander saw them together. Zander then slept with Liz, and she got pregnant with Cameron Webber (Michael Leone).

Lucky was a father figure to Cameron and had planned to adopt him at one time, but he and Liz separated before the adoption took place. Ric Lansing (Rick Hearst) also wanted to adopt Cameron before Zander died.