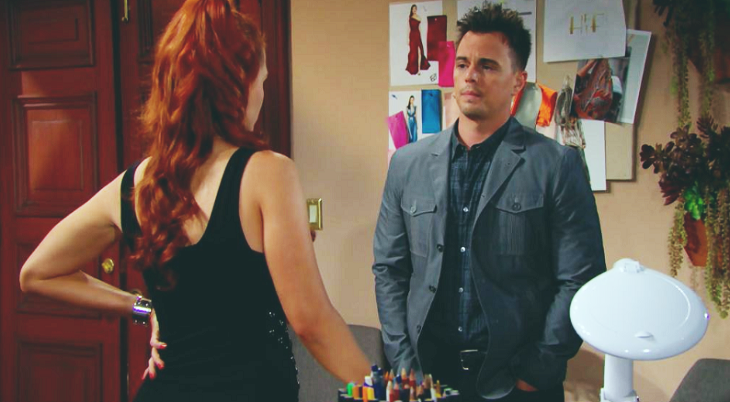 The Bold and the Beautiful spoilers for Monday, August 12, tease that Steffy Forrester (Jacqueline MacInnes Wood) and Hope Logan (Annika Noelle) will find themselves in a standoff. As B&B viewers know, Hope has just made it known that she’s taking Beth Spencer (River Davidson and Madeline Valdez) home, and Steffy is in utter disbelief.

Steffy has just appeared to realize that the little girl she’s been raising as her daughter is indeed Beth, and not her beloved “Phoebe Forrester.” It’s taking her some time to face the reality of the situation, and her maternal instincts are telling her to protect “Phoebe” from being taken away from her home.

On Monday’s B&B episode, look for some emotional scenes as Steffy has to face the fact that things will never go back to the way they were. Hope certainly isn’t going to relent from her position that she’s taking Beth home. She’s been kept away from her daughter for months now, and she’s determined not to spend another night apart from her.

Steffy will certainly have support and comfort from her dad Ridge Forrester (Thorsten Kaye), and Liam Spencer (Scott Clifton) will also be sympathetic to Steffy’s wishes that Beth stay with her for the time being, but in the end, Liam will almost certainly agree that Beth needs to go home with Hope. Liam’s going to be an impossible position, as he wants his daughter to be with Hope, but he feels absolutely terrible for what Steffy’s going through.

Despite Steffy’s pleas and her near-breakdown over losing “Phoebe,” it doesn’t look like Hope is going to back down from wanting to take Beth home. Beth seems content in Hope’s arms, and since the baby won’t be in distress, she certainly won’t see any reason to leave her with Steffy. It looks like Hope will indeed take Beth home, leaving Steffy empty and crushed.

Meanwhile, on Monday’s new episode of B&B, Wyatt Spencer (Darin Brooks) will continue his conversation with Sally Spectra (Courtney Hope). As B&B viewers know, he’s just offered an apology to Sally for his actions after he learned about her secret with Thomas Forrester (Matthew Atkinson).

Of course, B&B viewers will remember that Wyatt broke up with Sally after he found out that she knew that Thomas was planning on breaking up Hope and Liam. Sally said nothing to Wyatt about it, and once Wyatt found out the truth, that was the end of their relationship.

On Monday’s episode, Sally will be curious about what’s happened between Wyatt and Florence “Flo” Fulton (Katrina Bowden), and Wyatt will fill her in on all the sordid details. Sally will surely be shocked by the extent of Flo’s deceit and lies, not to mention her criminal activities.

But what will this mean for Sally and Wyatt going forward? Sally might not be willing to immediately take Wyatt back, given that he seems to be running right back to her the minute things went south with Flo. But she might be willing to start over with Wyatt. Time will tell whether these two get back together again, but perhaps for now they’ll be able to start things over as friends.