Bold And The Beautiful POLL: What Is Next For Steffy After Beth Reveal? Vote Now! 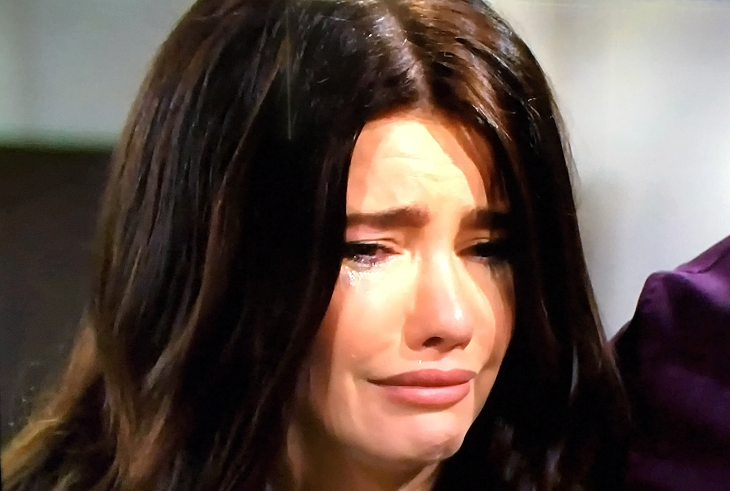 Steffy Forrester’s (Jacqueline MacInnes Wood) life has been upended on ‘The Bold and the Beautiful’. The little girl she thought was adopted, who was named Phoebe Forrester (Madeline Valdez and River Davidson) in honor of her own departed fraternal twin, is Beth Spencer.

The dramatic fallout from this reveal was generated by the villainous Reese Buckingham’s (Wayne Brady) desperate gambling debt repayment scheme, the aid of his willing accomplice, Flo Fulton Logan (Katrina Bowden), a group of enablers, and the actions of a second villain, Thomas Forrester (Matthew Atkinson).

At one point in the episode where Douglas Forrester (Henry Joseph Samiri) was dropping the news that Phoebe was Beth, Steffy told her nephew that he shouldn’t be lying. Her comments were naive.

Bold And The Beautiful Spoilers – Steffy Forrester Was Denying The Truth

Steffy didn’t want to believe that what Douglas was saying was true. Beyond the then incredible nature of his verbal content, the actuality of Beth being alive would mean that Phoebe never existed. In time and with reflection, Steffy will appreciate that Hope Forrester (Annika Noelle), then possibly using the last name Spencer again, has to be with Beth. She’s her mother.

Bold And The Beautiful Spoilers: Will Ingo Rademacher Return To B&B As Thorne Forrester? https://t.co/ggy0kxeclI pic.twitter.com/wjy5rxDsO1

But in the immediacy of what’s happening, Steffy will naturally be devastated. The cruelness of what Reese and the others did allowed Steffy to form a full bond with Phoebe-Beth. Having to hand her over to Hope will be crushing.

Steffy has demonstrated full selflessness in the past where Hope was concerned. As B&B fans know, Wood’s character told Liam to go back to Hope last year and then advised them to get married. Both events happened. So, Steffy could tap similar strength and give Beth to her parents without any resistance. However, the circumstances are different now.

Instead of making a choice, Steffy is being forced to deal with the information that’s been dumped on her. She’s had no chance to prepare for this unexpected reality, with raw emotions likely spurning maternal instincts to remain tied to the girl considered to be Phoebe. Legal issues are cloudy in this instance. What rights would someone like Steffy have, as she was an unknowing victim of what Reese and Flo did?

It’s surely possible that a compassionate judge would grant Steffy ongoing visitation with Beth. But surely Hope and Liam wouldn’t need to be told that by the legal system. ‘Lope’ will certainly want Steffy to maintain ties, as they become Beth’s full-time parents.

Liam will want to split time between his daughters. However, he may fully reconnect with Hope, or remarry her, which will impact Steffy in unknown ways. That effects of that wild card outcome must also be considered.

Fans of ‘The Bold and the Beautiful’ rightfully express their opinions on a regular basis. So, what is Steffy’s path forward after Beth reveal? Please vote in our poll below!