Days Of Our Lives Spoilers: Anna Makes A Shocking Announcement 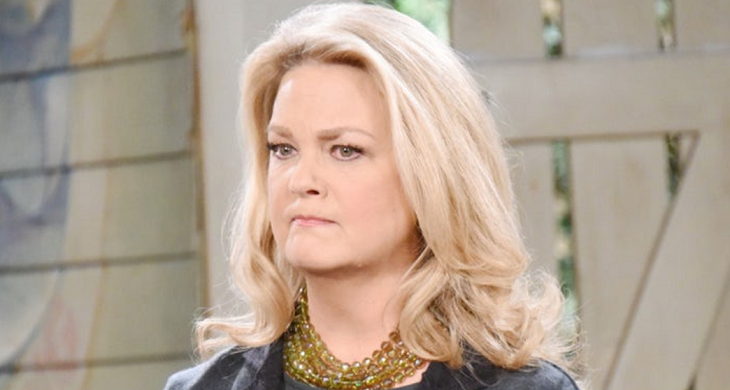 Days of Our Lives spoilers reveal that Tony DiMera (Thaao Penghlis) will finally reunite with his one true love. However, Anna DiMera (Leann Hunley) ends up making a shocking announcement. Find out what it is and what could happen next on the NBC soap opera.

All of these years, it has been believed that Tony died. However, he ended up being saved. For the time he was “dead,” he was actually getting the same treatment as Jack Deveraux (Matthew Ashford) and presumably, EJ DiMera (formerly James Scott). However, it seems that Tony’s treatment went a lot better than the other patients because his memory is intact.

Days of Our Lives spoilers reveal that Anna always had a feeling he was alive. She was insistent on it and was hunting clues, searching for her beloved Tony. It turns out she was right and soon, they will meet face to face once again.

During the week of August 12, Tony and Anna will finally meet each other once again. However, it is going to be awkward. Tony just married his own sister, Kristen (Stacy Haiduk). Of course, everyone thinks she is actually Nicole Walker (Arianne Zucker). He has got a lot of explaining to do!

It is not clear if Anna already knows about Tony’s marriage to Kristen/Nicole. Perhaps she reads about it in the newspaper or hears from a friend. If she doesn’t know, then it will be a shock that Tony moved on without her.

However, expect Tony to explain the truth to Anna. He did tell Kate the partial truth… that he is married to Nicole in name only so she could become CEO of DiMera Enterprises.

DOOL spoilers indicate that this leads to Anna’s shocking announcement. She decides that she is going to marry Roman Brady (Josh Taylor).

Days of Our Lives #DOOL Spoilers: Rex Uses Nicole To Get Back at Sarah @SoapOperaSpy https://t.co/W2zPPGbln0

Yes, she ropes Roman into another one of her scandalous schemes! Only time will tell what else Anna has planned and how far Roman will go to help Anna.