Young And The Restless Last Week In Review: Abby Gets Iced – Sharon And Adam Hit The Sheets – Theo And Kyle Have It Out 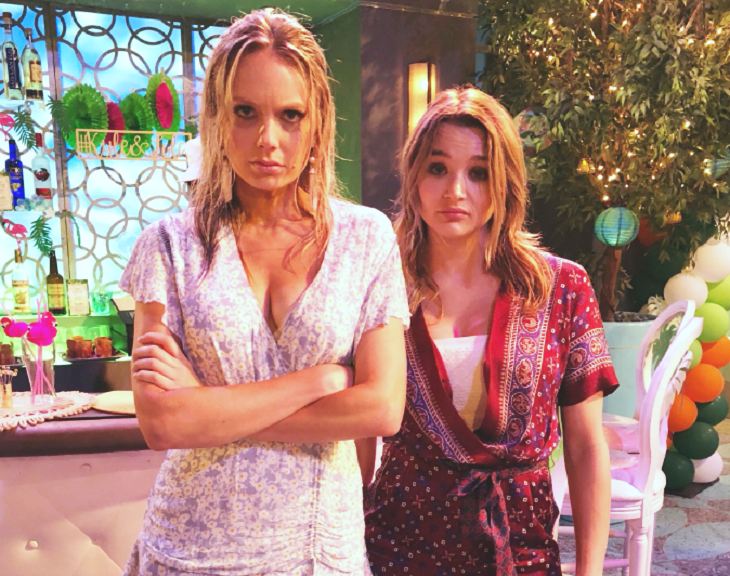 Last week on The Young And The Restless (Y&R), Abby Newman (Melissa Ordway) and Nick Newman (Joshua Morrow) were taking no flack as they both got ready to rumble. Nick got into it with Adam Newman (Mark Grossman) over Christian and Abby and Summer Newman (Hunter King) had an epic cat-fight at the Kola bachelor/bachelorette party.

“You plow through men like they’re bowling pins,” Summer continued. She went on to list all of Abby’s failed relationships. “Then there was Arturo, but I guess you couldn’t be plowing through him, since he was plowing Mia.”

Young And The Restless Spoilers – Bachelor/Bachelorette Party Turns Into Brawl

At this point, Abby had heard enough from her niece and pushed her. Summer responded by grabbing an ice bucket and dumping it over Abby’s head! Then Abby threw a drink at Summer and the two of them began shoving each other back and forth, until peacemaker Mariah Copeland (Camryn Grimes) broke it up.

This bout was reminiscent of some of the epic Katherine Chancellor (Jeanne Cooper) and Jill Abbott (Jess Walton) cat-fights of old. Y&R needs more of this – it’s scenes like this one that keep fans coming back for more!

Meanwhile, at the same time the catfight was occurring, Kyle Abbott (Michael Mealor) and Theo Vanderway (Tyler Johnson) were having it out. Their heated argument involved talk of an underage girl who “could have died” if Kyle hadn’t paid off her father. It’s got to have something to do with the dark secret Kyle is hiding from his bride to be.

But, ever the boring voice of reason, Lola Rosales (Sasha Calle) grabbed a microphone and told everyone to calm down and stop fighting. Yawn. This “perfect” girl needs a personality implant.

And Adam and Nick got into their own physical altercation at Y&R’s Chancellor Park, when Adam told Christian he was the boy’s father. This led to Nick punching Adam, which was witnessed by Sharon Newman (Sharon Case), who broke up the battle.

This ultimately steered Sharon and Adam into a physical altercation of a different kind. The two hit the sheets in a smoking hot love scene that left Shadam fans wanting more. But once Rey Rosales (Jordi Vilasuso) showed up at Adam’s penthouse and saw Sharon coming down the stairs from the bedroom it killed the afterglow, and she bolted immediately.

So Y&R fans, do you think Shadam will continue their relationship? And do you think Kola will still get married, with the secret Theo is holding over Kyle’s head? Voice your opinion in the comments section below and don’t forget to check Hollywood Hiccups often for the latest “Young and the Restless” spoilers, rumors, updates and news.