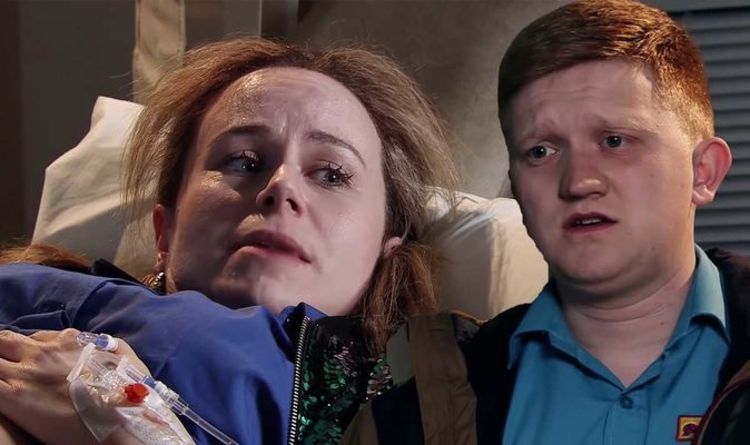 Coronation Street spoilers tease that Gemma Winter (Dolly Rose Campbell) might have a dramatic labor and delivery. But before that happens, she’s going to have to squeeze herself out of a little trouble before she gets to the hospital! Here’s what you need to know.

Unfortunately, Gemma hasn’t had the best pregnancy. It seems as it has been one disaster after another for the so-called ‘kebab queen’ who is currently carrying four little babies. And just when things couldn’t get any worse for her, it appears as though she gets trapped in a turnstile with her big belly. And yes, there’s a very good chance that she might end up giving birth then and there!

Coronation Street spoilers tease that Gemma and her boyfriend Chesney Brown (Sam Aston) are heading out for a day at the stadium but as she tries to get past the front entrance, she finds herself just a little too big for the turnstile. She’s left crying out for help after realizing that she has been trapped. Chesney has no choice but to call emergency services in the hopes that nothing will happen here and there. However, Gemma is left mortified when she is surrounded by the fire brigade and can’t even move an inch!

One Struggle After Another

As many fans know, Gemma and Chesney have had a whirlwind of an adventure so far with their pregnancy. While they have been struggling to make ends meet, they’ve been doing whatever they can to save up for their new family, with Gemma even working both day and night shifts. Unfortunately, they keep on hitting one roadblock after another, with also the unexpected visit from Gemma’s wayward mother in town who wants nothing more than to swipe them from whatever money they’ve got.

Will Gemma end up giving birth at a hospital? Will it be smooth labor and delivery? Or are fans going to see some dramatic scenes before the babies arrive? With the way things have gone so far, anything can happen at any time. Viewers will find out soon enough!