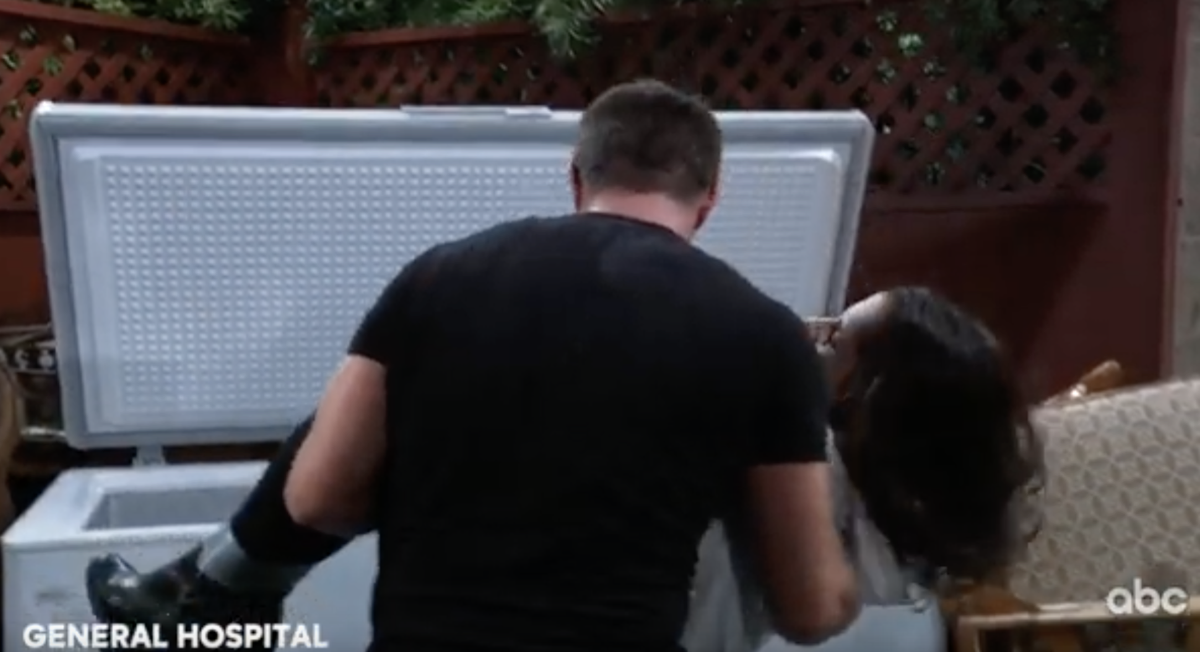 Some General Hospital viewers wonder why Sam didn’t try harder to free herself from the freezer that she was trapped in, instead of waiting to be saved. It is true that Sam has been in worse situations, such as when she was at the bottom of a culvert and went into labor with Scout Cain (Ella Ramacieri) several years ago. She tried to climb out, much as Carly Corinthos (Laura Wright) did several months ago when Ryan Chamberlain (Jon Lindstrom) threw her down a culvert, but kept sliding back down.

What is different in this case, is that a freezer is airtight, and even though Sam is an experienced diver and therefore has learned how to hold her breath and conserve her air, an airtight freezer without much room to move around in is an entirely different situation! Wiggling around trying to chew through the duct tape binding her hands would have used up too much air much too quickly! Sam easily could have died in that freezer if Jason hadn’t found her in time!

GH Spoilers – Sam Knew How Close She Came To Death

Sam knew how close she’d come to dying in that freezer and admitted her fear to Jason in Thursday, August 8th’s episode of General Hospital. She was on doctor ordered bedrest and that usually doesn’t happen unless someone has been through something very traumatic or she is in the last part of a high risk pregnancy! She also realized she’d been played by Shiloh, and that’s just not like Sam and she knew it!

She even blamed herself for falling into Shiloh’s trap and that now an innocent person could wind up in a vegetative state after an unsuccessful attempt by Shiloh and Dr. Arthur Cabot (Time Winters) to implant Drew Cain’s (Billy Miller) memories into them!

General Hospital Spoilers – Perhaps Sam Could Use An Actual Vacation

Sam and Jason have been going at it nonstop for months trying to take down Shiloh and have pretty much succeeded in taking down his cult, Dawn of Day, but the hits just keep on coming – on Shiloh, by Jason, and sometimes by Michael Corinthos (Chad Duell)! They haven’t had a lot of time for rest and relaxation, because they’ve been going from crisis to crisis and that might be starting to wear on Sam, and it could even be why she’s not exactly on top of her game as she usually is!

If it weren’t for the danger currently on Sonny Corinthos’ (Maurice Benard) island near Puerto Rico in the person of Cassandra Pierce (Jessica Tuck) maybe Jason and Sam should go there and have some rest and relaxation! But, perhaps now would not be such a good time to go there, although Cassandra may by now be in the wind again! But, for now, even one day of rest and relaxation, even as a staycation, might be just what the doctor ordered!