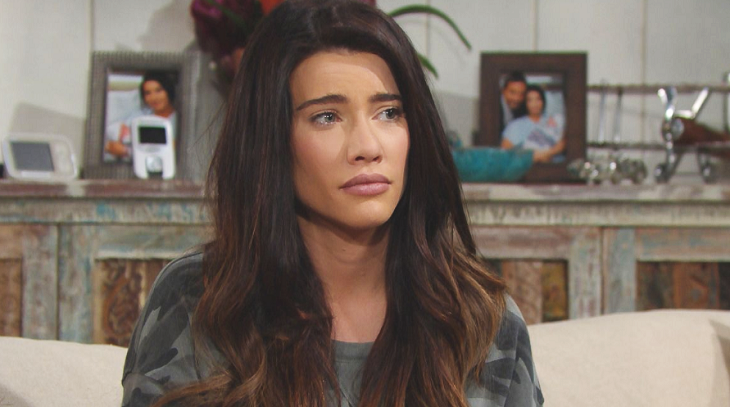 The Bold and the Beautiful spoilers tease that Steffy Forrester (Jacqueline MacInnes Wood) needs tremendous support. The pain that Hope Forrester (Annika Noelle) and Liam Spencer (Scott Clifton) are starting to escape from is vastly different than what Steffy is just beginning to experience.

The horrid baby steal and conceal defy logic. That’s one reason why the just-announced reveal is overwhelming Steffy’s mind. Hope and Liam are fully empathetic. They truly recognize and can understand Steffy’s feelings as no other two people could. Not because their loss was similar, but because Wood’s character was the one person who has been taking care of their daughter for months.

Beth Spencer’s (Madeline Valdez and River Davidson) parents had their baby stolen on Catalina Island by the diabolical and selfish Dr. Reese Buckingham (Wayne Brady). Flo Fulton Logan (Katrina Bowden) became his accomplice, after which she was followed by a group of enablers who maintained silence about the scheme.

Thomas Forrester’s (Matthew Atkinson) most heinous act was a crime, as he forced Emma Barber’s (Nia Sioux) car off Mulholland Drive, where she plunged to her death. His second dastardly act represents an infinitely moral offense, as Thomas allowed his sister to believe that Beth was the girl who came to be known as Phoebe Forrester. Only the most twisted mind would have done that to his own flesh and blood in order to realize a forced marriage.

Bold And The Beautiful Weekly Spoilers August 12 to 16: Steffy Hands Over Beth – Thomas Goes Into Hiding

It was so sad to see Steffy looking for ways to handle the information Lope was providing to her about what really happened all those months ago after Hope delivered a healthy baby girl. Steffy’s maternal instincts remained in full force as the information drip continued, with her concern for the people who were involved being real. But those people, more specifically that couple, were right in front of her at the cliff house.

As Ridge Forrester (Thorsten Kaye) quickly recognized, his daughter was going to be devastated by this reveal. While he gathered the driver’s licenses from Flo, Shauna Fulton (Denise Richards), and Zoe Buckingham (Kiara Barnes), Ridge also considered what he and Brooke Logan Forrester (Katherine Kelly Lang) just learned about Thomas’ awareness and actions.

This matter isn’t one that Steffy will be able to quickly recover from. On the upside, the girl she came to think of as her own is fine. Her parents care deeply for Steffy and will surely want her to maintain access to Beth.

When the soapy clouds lift, everyone should recognize the blessing of having Steffy be a real mother to Phoebe-Beth. That allowed this child to remain with her dad and be near to her biological mother.

Beth’s life was never in true danger. The adults who were impacted will soon begin the healing process as well.