Bold and the Beautiful Spoilers: Tuesday, August 13 – Brooke & Ridge Battle Over Their Daughters – Hope Confesses Her Love To Liam 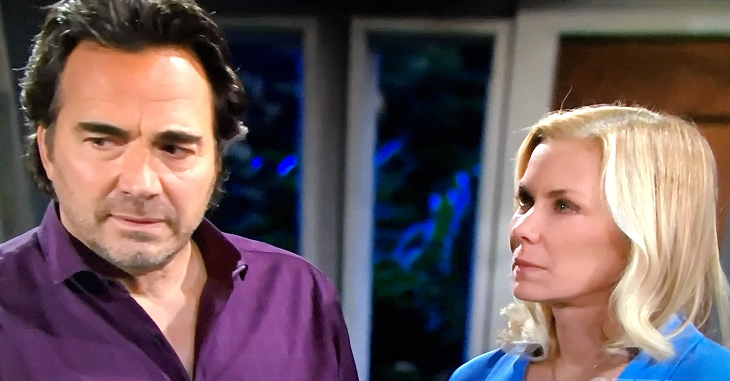 The Bold and the Beautiful spoilers for Tuesday, August 13, tease that Brooke Forrester (Katherine Kelly Lang) will be feeling elated for her daughter Hope Logan (Annika Noelle). As B&B viewers know, Hope has just been reunited with her daughter Beth Spencer (River Davidson and Madeline Valdez) and is in the process of bringing her home to the cabin for the first time.

It looks like Brooke will help Hope and Liam Spencer (Scott Clifton) get settled in with their daughter, then Brooke will leave them alone to have some time as a reunited family. Meanwhile, Ridge Forrester (Thorsten Kaye) will likely be returning form Steffy Forrester’s (Jacqueline MacInnes Wood) house, where he’s just spent time comforting her after she broke down in his arms over losing Beth.

The Bold and the Beautiful spoilers indicate that Brooke and Ridge are going to be on different ends of the spectrum when they finally meet back up at the main house. Brooke will be absolutely thrilled for Hope, since she’s got her family back. But Ridge will be feeling devastated for Steffy, who is now suddenly minus one daughter and struggling with intense feelings of grief and loss.

Look for some tension between Brooke and Ridge, as they struggle to coexist while harboring their very different emotions. Of course Ridge will feel happy for Hope, since she’s got her daughter back, but he’ll be very aware of how difficult this situation is going to be for Steffy going forward.

Meanwhile on Tuesday’s new episode of B&B, Hope and Liam will get themselves and Beth settled into the cabin. As B&B viewers know, they’ve been through a seriously stressful day, including a major fight with Thomas Forrester (Matthew Atkinson) at Forrester Creations, and then the big scene with Steffy later that evening over taking Beth home.

Hope, Liam, and Beth will have some nice moments together in the cabin as a family. Look for some touching scenes as the three of them finally get to be a family in the cabin as they had dreamed of. Hope and Liam will also probably need to talk and process everything they’ve been through in just a few short hours.

Bold And The Beautiful Spoilers – Thomas Forrester Is Still Out There

After all, they’ve been though a harrowing ordeal, and they’ll know that Thomas is still out there somewhere on the run. That will probably leave them a bit unsettled, and they’ll probably want to address the issue and deal with the fact that Hope is still married to Thomas. It looks like they’ll need to have a “where do we go from here” conversation pretty soon.

It will be interesting to see how Liam responds to Hope’s declaration of love and her desire to have her family back. Of course, Liam has made it clear on numerous occasions that he still loves Hope, and that he never wanted the annulment to begin with, so it looks like he’ll be receptive to returning Hope’s feelings.