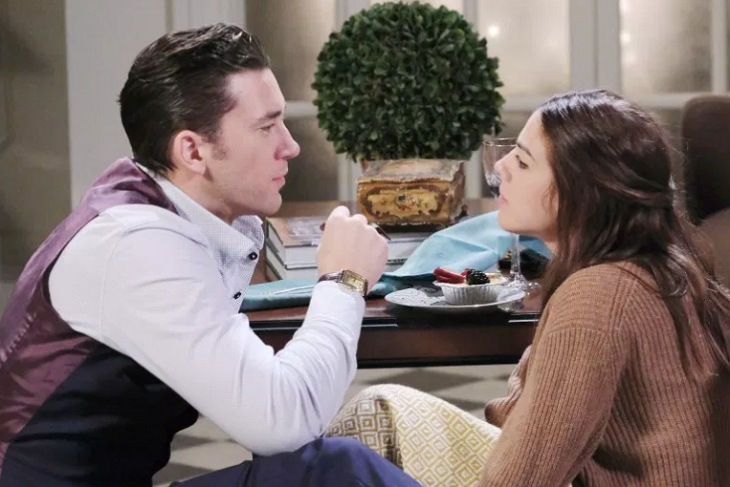 Days of Our Lives spoilers tease the return of “Chabby.” They are not appearing on current episodes yet. However, in the meantime, they are on the digital companion series Chad and Abby in Paris.

During a recent interview, actors Billy Flynn (Chad DiMera) and Kate Mansi (Abigail DiMera) discussed their characters and the upcoming return of “Chabby.” The interview was published in the latest issue of Soap Opera Digest.

The reason Chad and Abby in Paris is called a companion series is because it’s not a different show entirely. It is meant to complement the NBC soap opera. It shows fans what “Chabby” has been up to while they were missing from our television screens.

“It was pitched to sort of be a spin-off in a sense of what Chad and Abigail were doing off canvas,” Flynn said. “It would follow them to line up with where the show is right now and the die-hard ‘Chabby’ fans have something to watch until we get back on the canvas.”

Fans can’t wait for Chad and Abigail to return to DOOL. They are currently filming episodes, but we won’t see them on the small screen until early fall.

Due to the digital series only being 10 minutes per episode, it really brings the focus on one set of characters at a time. It also condenses the storyline and makes the series not so “drawn out” like a television episode.

Days Of Our Lives News – Chabby Has Started Facing Some Obstacles

“The first episode that we shot together, Josh Taylor (Roman Brady) was on set that day and he came upstairs, shook my hand and said, ‘That was so exciting,'” Mansi explained. “You guys just did a 10-minute scene. That was amazing.’ It sort of felt like we were doing a scene from a rom-com.”

So far, it appears that Chad works a lot and Abigail is feeling lonely. Then, Austin Reed (Austin Peck) shows up and explains that he and Carrie (Christie Clarke) are going through a divorce. It is making viewers wonder if there will be cheating, or at the very least, an emotional affair.

Days of Our Lives Spoilers: Will Austin and Abigail Have an Affair? Chad and Abby in Paris Hints at It https://t.co/TPifpEeTiy pic.twitter.com/P82xqSF0VQ

Fans don’t want any more obstacles for the couple. They are a favorite and have already been through so much. But in the soap opera world, there would be no story to tell if everything were perfect.