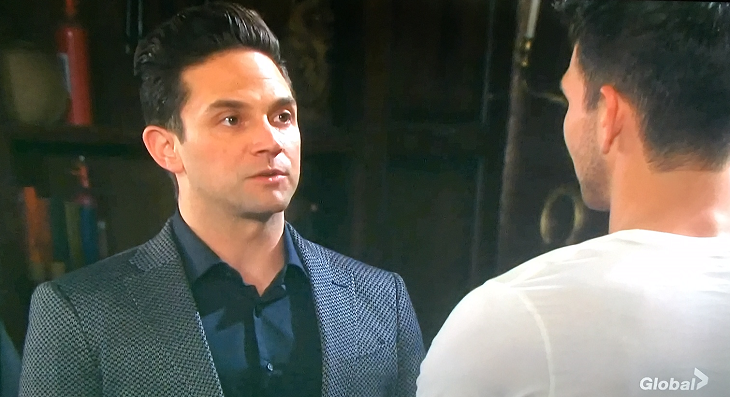 Ciara understands why Stefan DiMera (Brandon Barash) would marry Gabi DiMera (Camila Banus). Ben is afraid Gabi will throw him out of the house and fire him from his job. Gabi calls just as they think they will have some time alone together. She wants Ben to increase security to keep Stefan off the property. Stefan wants Ben to investigate Ted Laurent’s (Gilles Marini) death, including Hope Brady (Kristian Alfonso).

Ciara wants to know why he wants Hope investigated. Ben tells Ciara that Hope was there before him and has killed before. Stefan isn’t investigating Hope – he wants to investigate something Hope said. Stefan tells Ben and Ciara about Hope finding her necklace in the garbage. He thinks the woman threw away the necklace and money to make it look like a robbery gone wrong. Stefan suggests that Nicole was the kidnapper and he tells Ciara that Hope had said something looked familiar about her.

Days of Our Lives Tony Dimera (Thaao Penghlis) is furious that he has to stay married to Kristen DiMera (Stacy Haiduk). Kristen tells Tony he is married to Nicole. She threatens to keep Tony prisoner and says she will kill him. Tony tells Kristen that Anna will find out he is alive at some point.

Kristen suggests Tony sneak around with Anna until she gets control of DiMera. Tony tells Kristen that Anna would never go along with this. Kristen can’t trust Anna to keep her mouth shut and threatens to kill her also. She then accuses Tony of murdering Ted. Kristen tells Tony if it comes out that he killed Ted, he will be in prison for life.

Days of Our Lives Anna Dimera arrives at the pub. Roman Brady (Josh Taylor) and Kate Dimera (Lauren Koslow) assume Anna is there because of Tony. Anna has no idea that Tony is alive. In fact, she had plans to scatter Tony’s ashes. Anna tells Roman the cops gave Tony’s ashes back to her. Kate and Roman tell Anna that is not Tony’s ashes in the urn.

Kate tells Anna that Tony is alive. Anna is stunned and accuses Kate and Roman of lying. She doesn’t believe any of their stories. Kate tells Anna she has seen Tony. Anna thinks Kate is messing with her. Kate says Tony spent the night in her hotel room on her sofa. Anna is shocked that Tony has a wife. Anna is furious and runs into Tony.

Days of Our Lives Brady Black (Eric Martsolf) and Chloe Lane (Nadia Bjorlin) talk about him sleeping with Nicole. Brady can’t quit thinking about Kristen. Chloe is stunned when Brady tells her that Nicole is married to Tony. Brady cannot figure out why he is thinking of Kristen while in bed with Nicole. Brady thinks it has something to do with the tattoo. Chloe asks if Nicole has a tattoo, Brady says Nicole has scar tissue where Kristen’s tattoo was.  John and Marlena arrive and want to ask Brady some questions and blows up at him over sleeping with Nicole. Brady tells John that it was oddly right, he thinks things can be different this time.