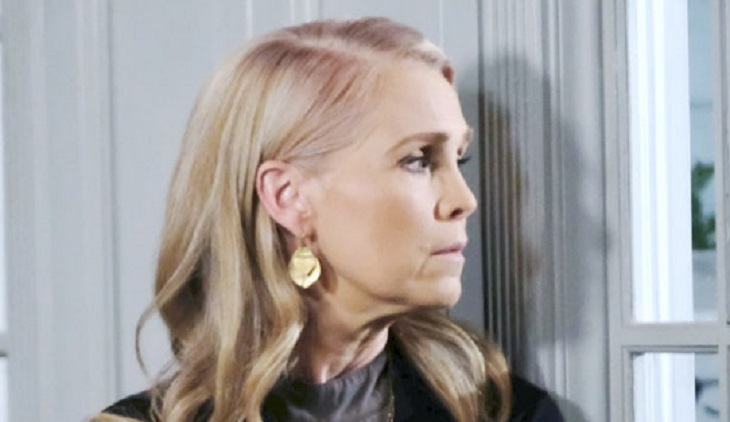 Days of Our Lives spoilers tease that Jack Deveraux (Matthew Ashford) will confront Jennifer Horton (Melissa Reeves) about an article she wrote about him this week on Days of Our Lives; is he starting to worry about her opinion of him?

Did Days Of Our Lives Viewers Catch That Look?

Observant Days of Our Lives viewers may have caught that look that Jack gave Jennifer as he walked away from her and Abe Carver (James Reynolds) in Tuesday, August 6th’s episode; this was after Jack walked in on a conversation where they were discussing Jack, Eve Deveraux (Kassie DePaiva) and how she had destroyed any chance of Jack ever regaining his memories due to her destroying both Dr. Wilhelm Rolf’s (William Utay) diary and the batch of serum!

Then Jennifer talked to Jack about making different choices since he wasn’t with Eve any more. Jack stubbornly told Jennifer and Abe that he was not going to change, and would never let his personal feelings interfere with his judgment! As Jack walked away and Abe told Jenn that he could tell that part of Jack wanted to be the man he used to be, Jack turned around and stared at Jennifer when she wasn’t looking! It could mean that Jack cares more about Jennifer’s opinion of him than he wants to admit!

Spoilers from Soap Opera Digest indicate that Adrienne Kiriakis (Judi Evans-Luciano) will also be involved in this confrontation, possibly because she and Jennifer are together when Jack comes over to Jenn. Longtime Days of Our Lives viewers will recall that when Adrienne came back to Salem in 2007, it was to help her sister-in-law Kayla Brady Johnson (Mary Beth Evans) with Steve Johnson (Stephen Nichols) when he was suffering from amnesia, and Adrienne is Steve and Jack’s sister.

This could be what Jenn and Adrienne may be talking about when Jack interrupts them, regarding Jack’s amnesia. Jack just recently had restored Jennifer’s press credentials after revoking them in July 17th’s Days of Our Lives episode for throwing an old article Jack himself had written in his face, to prove to him how he had turned from an honest, caring man who cared about justice to a slimy, self-serving politician! Days of Our Lives spoilers do not reveal exactly which article has caused Jack to have such a burr in his bottom, or exactly what is in it, but it must be something that upsets him badly enough to interrupt his sister and his ex-wife in a conversation and confront Adrienne along with Jennifer!

Perhaps the article is about the old Jack and contrasts him to the new Jack; maybe Jennifer even includes the old editorial as part of the article, like a “Throwback Thursday” type of article and it makes Jack feel guilty about some of the things he has done recently, which he claims to be proud of, but Jennifer editorializes in her article about the contrast between old Jack and new Jack, or maybe his policies. She wouldn’t attack him personally in print. He may be offended at what she writes about him not necessarily because of what she has written, but that she has written it.

Time will tell exactly what parts of this article Jack is upset with Jennifer about and why, but stay tuned to Days of Our Lives and keep checking Days of Our Lives spoilers frequently for all the latest news, updates and developments!