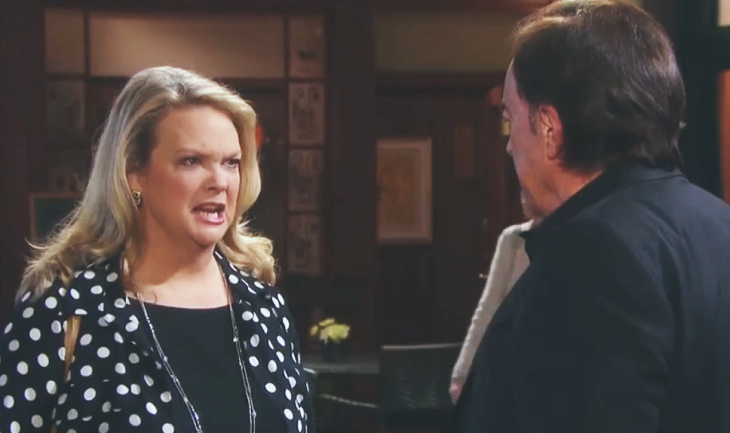 “Days of Our Lives” spoilers for Tuesday, August 13, tease that Kristen DiMera (Stacy Haiduk) will put her Nicole Walker (Arianne Zucker) mask back on and deal with a problem.

She was clearly irritated when Marlena Evans (Deidre Hall) showed up at her hotel room. Kristen will hope she can get rid of Marlena ASAP, so she’ll open the door as “Nicole” and urge her to leave.

Of course, Marlena won’t give up without a fight. She’ll feel obligated to push hard and really try to get through to “Nicole,” but that’ll just bring more of Kristen’s fury.

Days Of Our Lives Spoilers – Kristen DiMera Has A Violent Fantasy

“Days” spoilers state that “Nicole” will blast Marlena on Tuesday and attempt to stop all this meddling. Kristen will just want everyone to butt out and let her focus on her plan – particularly Marlena, a longtime enemy she hates.

It seems Kristen will have a violent fantasy about shooting Marlena, so that says a lot about her level of rage! While Marlena and “Nicole” argue, Sarah Brady (Linsey Godfrey) and Eric Brady (Greg Vaughan) will keep revving up the romance. They’ll enjoy another round of lovemaking as they bask in the bliss they’ve finally found.

However, “Days of Our Lives” spoilers say life will be anything but blissful for Xander Cook (Paul Telfer). Rex Brady (Kyle Lowder) may be out of the picture now, but Xander’s still got a huge stumbling block to Sarah’s heart. He’ll wish Sarah would choose someone who would love her and only her – someone meaning Xander!

Since Sarah’s going all in on Eric, Xander will just have to keep pining across town. Fortunately, there’s hope for Xander. The real Nicole will undoubtedly come back sooner or later, so she may recapture Eric’s heart down the road and leave Xander to pick up the pieces of Sarah’s.

Other “Days of Our Lives” spoilers say Anna DiMera (Leann Hunley) will rip into Tony DiMera (Thaao Penghlis). She’ll slap him twice for keeping her out of the loop on his return and quickly marrying “Nicole.” Tony will remain in a bind since Kristen’s threatening Anna’s life, so don’t miss the DOOL shockers ahead.

It sounds like another great episode’s coming up. We’ll give you updates as other “Days” news and rumors emerge. Stick with DOOL and don’t forget to check Hollywood Hiccups often for the latest “Days of Our Lives” spoilers, rumors, updates and news.