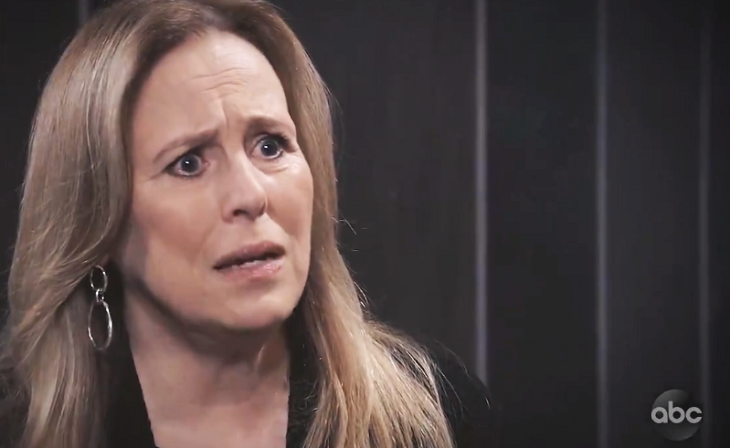 “General Hospital” spoilers for Tuesday, August 13, tease that Ava Jerome (Maura West) will face a shocker. Julian Jerome (William deVry) will reveal that he’s leaving town with Kim Nero (Tamara Braun), so Ava will have to wrap her head around that. She may wonder if this is really the right call, but Julian will insist it’s what he wants – for now at least.

In the meantime, Chelsea Lambas (Jen Ray) will speak with Laura Webber (Genie Francis). Ava’s psychic is a bit eccentric, but maybe that goes for all psychics! Regardless, she seems to know what she’s talking about when it comes to her psychic abilities. Chelsea will wonder who Laura’s trying to reach, which will lead to a warning about Nikolas Cassadine (last played by Nick Stabile).

“General Hospital” spoilers say Chelsea will drop a bomb on Tuesday. She’ll insist Laura’s son is in grave danger, so she’ll have to decide what she believes. Over with Stella Henry (Vernee Watson), she’ll be ready to catch a flight and meet her long-lost relative.

General Hospital Spoilers – Sonny Corinthos Is Happy For His Father

Curtis Ashford (Donnell Turner) and Jordan Ashford (Briana Nicole Henry) will have something to share, but Stella will push them to hurry up. Of course, there’s a chance Curtis and Jordan’s news may derail this meeting. It’ll be interesting to see where this “General Hospital” storyline heads next.

At the memory care facility, Sonny Corinthos (Maurice Benard) will suggest it’s never too late for family. Whether Mike Corbin (Max Gail) finally has a moment of recognition or not, Sonny will be happy to see his dad in such good spirits.

However, Nina will remain distraught over her “daughter’s” condition. That should tug at Jax’s heartstrings and leave him torn, especially once he catches Nina in a moment of vulnerability.

At GH, Franco Baldwin (Roger Howarth) won’t remember Elizabeth Baldwin (Rebecca Herbst) or their life together. He’ll have no clue who Liz is since he now has Drew Cain’s (Billy Miller) old memories.

Liz will be a mess over this awful situation, but she won’t give Franco up without a fight. He promised he’d come back to Liz, so she’ll cling to her husband’s firm vow. We’ll give you updates as other details and rumors emerge. Stick with ABC’s GH and don’t forget to check Hollywood Hiccups often for the latest “General Hospital” spoilers, rumors, updates and news.