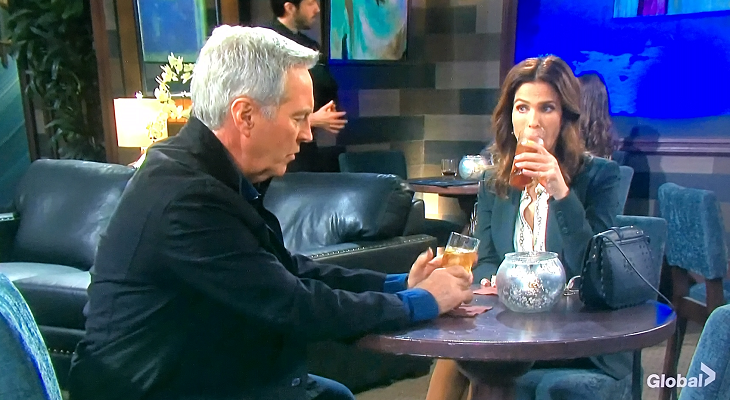 Will wants a comment from Xander about Ted Laurent’s (Gilles Marini) murder. Xander had no idea that Ted is dead. Will only wants a comment from Xander on the subject. Xander says he kept Ted alive. Will asks who Xander thinks killed Ted. Xander says he has a suspect for him. Will and Sonny ask who the suspect is. Xander accuses Will or Sonny of killing Ted since he blackmailed them. Xander refuses to answer questions about Ted’s kidnapping.

Days of Our Lives Sarah comes home to find Eric Brady (Greg Vaughan) making dinner for her. Sarah and Eric kiss, and he stirs their food. Sarah and Eric talk about the last time he cooked her dinner. Sarah believes she should have been honest then and saved them all a lot of pain. Eric says he thought Sarah and Rex Brady (Kyle Lowder) still had a connection. Eric thought he and Nicole did as well. Eric wants to reboot their relationship.

Days of Our Lives Anna DiMera (Leanne Hunley) comes face to face with Tony DiMera (Thaao Penghlis). Anna slaps Tony across the face three times. Anna is upset that Tony hasn’t gotten in touch with her in the past ten years. Tony tells Anna about his time at the warehouse. Anna can’t believe Tony couldn’t bother to make a phone call. Tony wanted to be there to touch and hold Anna. Anna tells Tony he touched other women instead. Tony says he thought of nothing but coming back to her.

Tony tells Anna his marriage to Nicole Walker (Arianne Zucker) is one of convenience only. Tony says he came back to her, they kiss. Anna is thrilled that Tony is back. Anna wants Tony to divorce Nicole. Tony doesn’t think they can. Tony tells Anna he has to see this through to the end. Anna wants to know how much time this will take. Anna tells Tony she has waited ten years and refuses to wait any longer and leaves.

Days of Our Lives John Black (Drake Hogestyn) tells Brady Black (Eric Martsolf) that Chloe Lane (Nadia Bjorlin) said to tell him goodbye for her. Brady gets a text from Nicole Walker wanting to see him. John tells Brady about the party he is planning next week. John talks to Brady about how Kristen is responsible for Marlena Evan’s (Deirdra Hall) shooting, Brady defends her.

Hope Brady (Kristian Alfonso) arrives as Brady leaves. Hope tells John that she believes Stefan DiMera (Brandon Barash) is innocent and tells him about the woman in the park. Hope tells Brady she thinks Nicole is behind this. John suggests having Eli check the necklace for fingerprints and then tells Hope about the anniversary party. Marlena walks in as he tells Hope to keep quiet because he doesn’t want Marlena to know anything about it. She asks what John doesn’t want her to know. John tells Marlena he and Hope are working together. Marlena invites Hope to her party for John as well.

Days of Our Lives Marlena Evans (Deidre Hall) goes to Nicole’s room to speak to her. Kristen answers the door with a gun in her hand and pulls Marlena inside. Kristen imagines shooting Marlena. Nicole answers the door, and Marlena tries to speak to her about Holly Jonas’ (Harlow and Scarlett Mallory) death. Nicole tells Marlena she is fine just the way she is. Nicole tells Marlena that she loves Brady. Marlena asks why Nicole married Tony. Nicole says she married Tony for Brady. Marlena won’t let Nicole hurt Brady or Eric again. Marlena says Brady wants to help her.

Days of Our Lives Spoilers: Tripp Admits His Feelings for Haley – New Love Triangle In The Works? https://t.co/wQraqZwhbW pic.twitter.com/4j5Rv4L9D6

Marlena says Nicole is tied up with her own issues right now. Nicole starts to pull out a gun but changes her mind. Nicole threatens Marlena with the cops and a restraining order. Brady arrives and puts a stop to their meeting. Nicole tells Brady she wants Marlena to butt out, he’s the only therapy she needs. Brady and Nicole start making out. Brady says they way Nicole kisses him seems familiar but different, and he doesn’t understand why. Nicole tells Brady they are different people now and need to stop over analyzing and enjoy their time together.