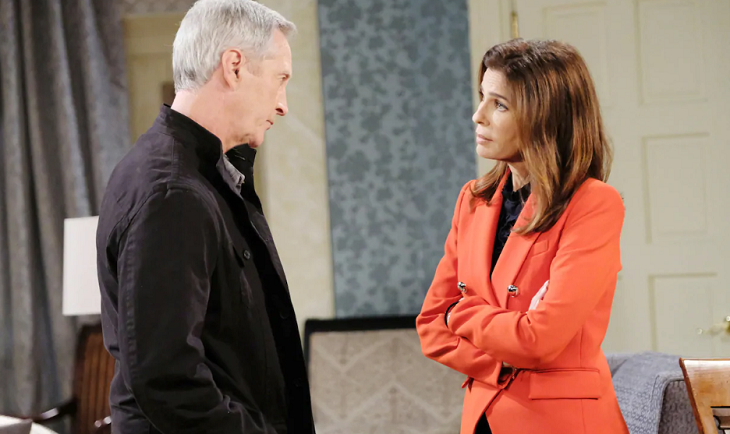 Days of Our Lives spoilers tease that John Black (Drake Hogestyn) and Hope Brady (Kristian Alfonso) will put the squeeze on Xander Kiriakis (Paul Telfer). Will he squeal?

Days of Our Lives viewers know that Xander’s been trying to make himself a better man under the watchful eye of Maggie Kiriakis (Suzanne Rogers) who he has come to view as a mother figure. Even though Sarah Horton (Linsey Godfrey) left Rex Brady (Kyle Lowder) for Eric Brady (Greg Vaughan) and not for him, maybe deep down he’s holding out some hope.

Afterall, Xander knows something no one else does – the real Nicole Walker (Arianne Zucker) could be alive somewhere, and likely with her daughter Holly Jonas (Scarlett and Harlow Mallory). Once Kristen DiMera (Stacy Haiduk) is out of the way, it would be safe for her and Holly to return to Salem.

Days Of Our Lives Spoilers – Will The Real Nicole Walker Return To Salem?

If that happens, Eric might just drop Sarah like a hot potato and drive her right into Xander’s waiting arms! Yes, Days of Our Lives viewers did see Kristen say that Nicole didn’t make it out of the warehouse. But maybe Xander saved her and has her somewhere, waiting for the right time to bring her back home to Salem.

John and Hope are going to squeeze Xander about Ted Laurent’s (Gilles Marini) and Kate DiMera’s (Lauren Koslow) kidnapping, and maybe ask if he knows anything about Ted’s murder. He had cut ties with Kristen by the time that happened, although he can give them a lot of information about the kidnapping!

But will he unmask Kristen to them in the process, or call her “Nicole” instead? Xander may not come right out and tell them that Kristen is disguising herself as Nicole, he may just refer to the two as separate individuals. He knows that Kristen could still come after him if he exposed her, or she could come after someone he cares about!

The Salem Police know that there is something fishy about the kidnappings and Ted’s murder as well and allowed Stefan DiMera (Brandon Barash) bail. Hope talked to her ex-husband Rafe Hernandez (Galen Gering) about her sting on Ted in his apartment.

She also mentioned how the mysterious hooded woman, who apparently lost the $100 bill and dropped the diamond necklace in the garbage in the park, which Hope had retrieved and given to Rafe for evidence must be connected to his murder!

Kate and Maggie have both mentioned seeing Kristen at “Nicole’s” hotel room at the Salem Inn. Tony DiMera (Thaao Penghlis), her fake husband, is not real comfortable about keeping up the charade. He knows Kristen has committed murders and even staged the accidental killing of Ted by himself in a scuffle over the gun. Xander may not be the only one that squeals, especially not now that Tony has seen his Anna DiMera (Leann Hunley) and wants her back!