General Hospital Spoilers: Alexis Is Shocked To Hear Julian Is Moving NYC, What Will She Do 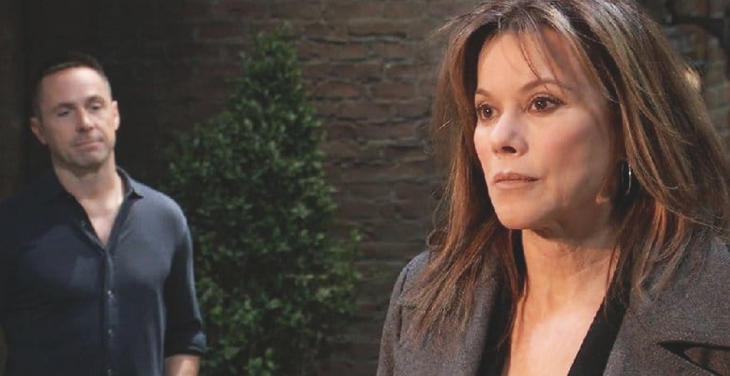 General Hospital spoilers tease that Alexis Davis (Nancy Lee Grahn) will be shaken when she hears that Julian Jerome (William DeVry) has made a decision to move to New York City with Kim Nero (Tamara Braun).

Julian really doesn’t want to leave Port Charles, since he has unfinished business trying to get his daughter with Alexis, Sam McCall (Kelly Monaco) to accept him. He has also just started bonding with his son Dr. Lucas Jones (Ryan Carnes).

Then there’s his son Leo Falconeri (Aaron Bradshaw) who he wants to stay close to. But he loves Kim and wants to support her, and she can’t handle living in Port Charles because of all the reminders of her late son Oscar Nero Quartermaine, (Garren Lake Stitt). Kim feels like she needs a new start in a new city.

Alexis literally walks in on a conversation that Julian is having with her daughter, Kristina Corinthos-Davis (Lexi Ainsworth), who of course Julian would have to let know that he’s selling the pub since she works there! Kristina asks if he’s told her mother yet and he said he hasn’t really had the time to approach the subject with her yet.

As Kim sits with Lucy Coe (Lynn Herring) at a table in the pub, looking over paperwork and discussing putting her condo up for sale, Alexis asks what she’s interrupting and should she brace herself for something. Julian says it all depends on where she would stand on the matter and tells her he’s selling the pub and that he’s moving to Manhattan.

He of course will explain that he and Kim are leaving together and planning on moving in together in New York City. Alexis does a supreme job of hiding her reactions and feelings about the matter and just says, well, OK, good luck. She wishes him well and doesn’t let him see that it bothers her in the least, although deep down inside, she’s shaken by the news!

It’s obvious to General Hospital fans that deep down, Alexis still has Julian baggage, and in spite of his love for and commitment to Kim, he still has Alexis baggage as well. The saying that one never gets over their first love definitely applies in Alexis’ case, and it may in Julian’s too.

They share a child and grandchildren, and for her part, he is the one who took her virginity although it’s never been explored on General Hospital as to if she took his as well. She was a high school senior and he was a college freshman.

Even though Alexis hides her true feelings about Julian’s moving, he and Kim will wonder after thinking about the possible repercussions to Alexis’ feelings and Julian’s family’s feelings if this is the right move after all.