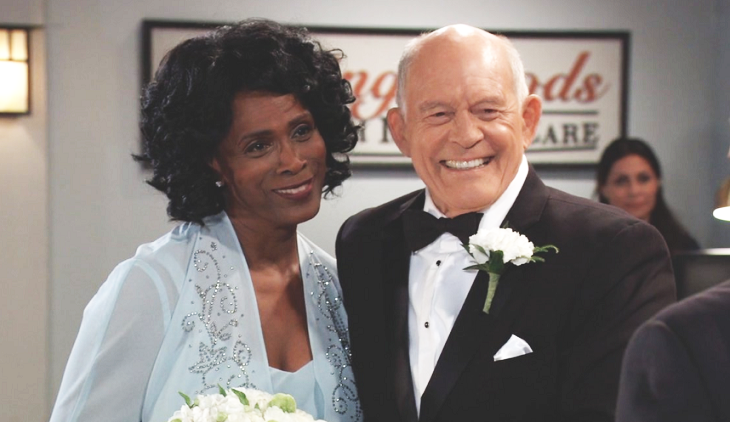 Sonny speaks from the heart about family. Sonny tells Mike and Yvonne to take care of each other. Family always watches out for each other. Sonny pretends to be the preacher for the wedding. Michael Corinthos (Chad Duell) joins them for the ceremony. Mike makes up his vows as he goes.

Carly hands them their rings and holds to the bouquet as Mike and Yvonne exchange rings. Sonny pronounces them husband and wife and Mike kisses the bride. Carly praises Sonny on the good job he did. Sonny thought Mike recognized him for a moment. Sonny asks while Mike and Yvonne should have all the fun. Sonny wants him and Carly to renew their vows.

General Hospital’s Michael is sitting with Sasha Gilmore (Sofia Mattsson) when Hamilton Finn (Michael Easton) comes to update Michael on his test results. Michael tells Finn about Sandy, and Finn says they need to find her. Nina Reeves (Cynthia Watros) wants to move Sasha somewhere else, Sasha wants to do like Finn suggests and stay at the hospital. Michael comes back to the hospital and tells Sasha he belongs there with her.

General Hospital’s Laura Webber (Genie Francis) meets with Chelsea Lambas (Jen Ray) who asks if she wants to speak with her dead brother. Chelsea can’t connect with Laura’s brother but has a message from her sister. Laura’s sister is glad she has found her happiness with Kevin Collins (John Lindstrom). Chelsea says Laura’s son is in grave danger.

Chelsea wants to help her, but they have to discuss payment first. Laura thinks Chelsea is very expensive. Laura wants a minute before she pays Chelsea. Laura tried to call Lucky to make sure he is OK. Lucky tells Laura he is fine and she hands up. Laura tells Chelsea that fortune-telling is illegal in New York. Chelsea tells Laura she isn’t talking about her son in Africa but the other one she should be worried about right now. Laura confides in Kevin about the meeting.

General Hospital’s Ava comes to Charlie’s and notices the for sale sign. Julian Jerome (William deVry) explains that he and Kim Nero (Tamara Braun) are moving. Kim wants to start over somewhere else, and he wants to go with her. Ava tells Julian he’s not leaving with Kim. Ava tells Julian her life has been hell after losing her child and the criticism is wearing on her. Ava tells Julian that he can’t leave her and  that Kim is going to have to face her pain sooner or later. Chelsea arrives, Julian isn’t happy with her. Chelsea tells Ava that her brother isn’t going anywhere.

General Hospital’s Franco Baldwin (Roger Howarth) believes he is Andrew Cain and demands to speak to his superior officer. Franco tries to leave the hospital, and Liz Baldwin (Rebecca Herbst) stops him. Franco argues that he is Andrew and she can’t keep him there against his will. He says he’s never seen Liz before.

Franco keeps trying to get past Liz, and she refuses to let him. Epiphany gives Franco a sedative to calm him down. Kevin tries to reason with Franco. Drew tells Franco that he is Andrew. Franco tells Drew they look nothing alike. Franco is stunned when he sees his face in a mirror.

General Hospital’s Nina Reeves is confiding in Jasper Jacks (Ingo Rademacher) about Sasha Gilmore’s (Sofia Mattsson) condition. Nina tells Hayden Barnes (Rebecca Budig) what is going on and leaves for the hospital. Hayden thinks she and Jax should take advantage of Sasha’s illness to search Windemere; Jax disagrees. Hayden believes what they are looking for is in Helena Cassadine’s (Constance Towers) trophy room. Hayden goes behind Jax’s back and goes to Spoon Island.

General Hospital’s Curtis Ashford (Donnell Turner) and Jordan Ashford (Briana Nicole Henry) are discussing Drew and Franco when Stella Henry (Vernee Watson) interrupts. Stella tells them about the relative from the website, and she is considering going to London to meet her. Stella has lots of vacation time saved up and wants to travel around the world. Curtis is skeptical about this deal.

Stella is shocked by Curtis and Jordan’s reaction. Curtis wants to do a background check, Stella is leaving tonight. Curtis loves how they have grown as a family, and he is going to miss Stella. Stella assures Curtis that she will always be there. Stella tells Curtis he is in good hands with Jordan and she gets a chance to do something for herself. Curtis tells Stella to go and have an incredible time.