The Bold and the Beautiful Spoilers: Wednesday, August 14 – The Logans Welcome Beth – Thomas Thinks He Can Still Win Hope 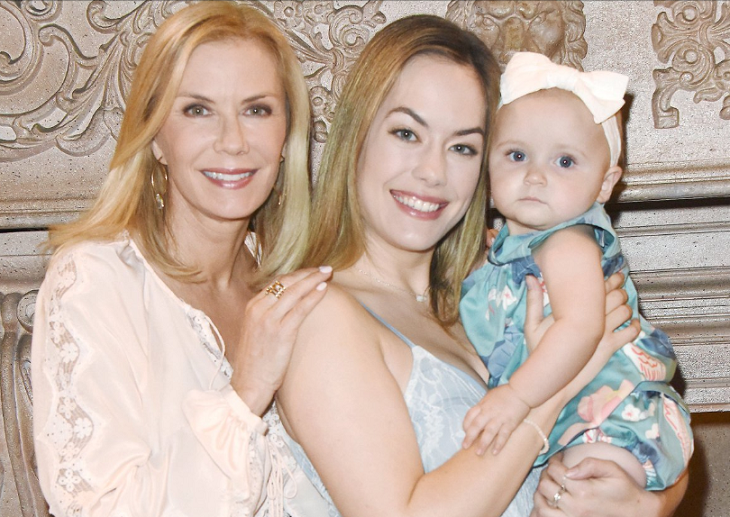 The Bold and the Beautiful spoilers for Wednesday, August 14, tease that Hope Logan (Annika Noelle) will be feeling right at home. As B&B viewers know, she will have just spent her first night at home with her daughter Beth Spencer (River Davidson and Madeline Valdez) and Liam Spencer (Scott Clifton), and it will be everything that she had hoped it would be.

On Wednesday’s episode of B&B, Hope will receive her first guests, and they’ll be people she’ll be thrilled to share her good news with. Her aunts, Katie Logan (Heather Tom) and Donna Logan (Jennifer Gareis) will arrive to see their new niece Beth. They’ll be anxious to see the newest and youngest member of the Logan family add welcome her to the clan.

Of course, everyone was already under the belief that the little girl was a Logan by birth, since until now everyone thought that her birth mother was Florence “Flo” Fulton (Katrina Bowden). But now that Katie and Donna know that she’s actually Hope’s daughter, it will be a cause for great Logan celebration.

Look for Hope, Katie, Donna, and Brooke Forrester (Katherine Kelly Lang) to enjoy some touching moments together as they make a proper fuss over Beth. They’ll also probably marvel at Flo’s betrayal, and how she deceived both Hope and Steffy Forrester (Jacqueline MacInnes Wood).

Bold And The Beautiful POLL: Where Will Liam Land In Wake Of Beth Reveal? Vote Now! https://t.co/CzR6GPAjA6

Meanwhile, on Wednesday’s new episode of B&B, Thomas Forrester (Matthew Atkinson) will resurface. Nobody has seen nor heard from Thomas since his big brawl with Liam at Forrester Creations. B&B viewers will remember that Thomas fled the scene once Liam exposed his deception to Hope, and he hasn’t been seen on canvas since.

According to B&B spoilers, viewers will learn that Thomas has been hiding out at his friend Vincent Walker’s (Joe LoCicero) place. Vincent is the friend who gave Thomas the drugs that he put in Liam’s drink to get him to sleep with Steffy a while back, so he’s trouble, and he seems to be willing to do whatever it takes to help Thomas.

Thomas will apparently be in bad shape. He’ll be angry that his plan to get Hope to himself went up in smoke, and he’ll probably realize that Hope has her baby back by now. According to B&B spoilers, a delusional Thomas will try to convince himself that he still has a shot at winning Hope back.

Of course, what Thomas really needs right now is some serious psychological help. After all, there is simply no way that Hope would ever want to be with Thomas after everything he’s done, and if Thomas were thinking clearly, he would realize that. But he won’t be thinking clearly, and so he’ll remain under the belief that there’s still hope for himself and Hope.

Thomas will probably try to convince himself that he needs to get Hope alone and talk to her, so that she’ll see his side of the story. He may even try to use her feelings toward Douglas Forrester (Henry Joseph Samiri) as a way to reel Hope back in. Thomas knows that Hope loves Douglas, so that might be his tactic.

At any rate, ongoing B&B spoilers indicate that Thomas will ultimately try his best to get Hope away from Liam, which certainly doesn’t sound good. We could be looking at a future kidnapping plot or something worse. B&B viewers will have to tune in to see how it all plays out!