Days of Our Lives Spoilers And Recap Wednesday, August 14 – Julie Is Upset With Lani And Eli; Eve Sues Jack 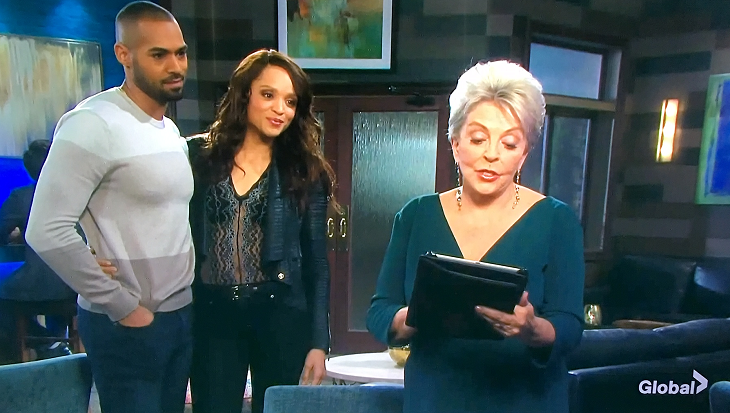 Julie is upset with both Lani and Eli. Julie is mad because Eli didn’t call her about the engagement. Eli and Lani wanted to tell her in person. Lani shows Julie the ring and says, you can’t flash it over the phone? Eli and Lani wanted to have their party next Thursday. Julie almost cancels Marlena Evans (Deidre Hall) and John Black’s (Drake Hogestyn) party, but they stop her and say they can wait.

Jack Deveraux (Matthew Ashford) approaches Kayla and Adrienne and attacks Adrienne for Jennifer Horton’s article. Jack is so upset that Kayla threatens to call the law if he doesn’t calm down. Jack and Adrienne argue, and he orders her to stay out of his life.

Days of Our Lives Haley Chen (Thia Megia) and Tripp are going through some boxes. Haley finds a picture of Steve and discusses how much he and Tripp look alike. J.J. Deveraux (Casey Moss) calls to tell Haley goodnight, and he loves her. Haley is nervous about spending the night alone in Claire Brady’s (Olivia Rose Keegan) room. Haley takes a sedative and prepares for bed. Tripp asks Haley if J.J. knows about the pills and hallucinations, she says no. Haley doesn’t want to be the girl who always needs to be rescued.

Haley says she’s not alone, she has him. Tripp offers his bed to Haley. Haley decides to go to bed. Tripp begins to realize he has feelings for Haley. Haley goes upstairs to sleep in Tripp’s room because of her nightmares. J.J.’s shift is canceled, and he comes home. Tripp starts to tell J.J. that Haley is asleep upstairs when she falls down the stairs. He takes Haley to the hospital and wants an explanation from Tripp.

Tripp finally tells J.J. and Kayla that Haley has been taking his sedatives to sleep. Kayla tells Tripp and Haley this was unethical. Tripp blames himself, and J.J. goes after Tripp. Kayla breaks up the fight and takes Tripp outside. Tripp admits to Kayla that he has feelings for Haley. J.J. reassures Haley and tells her she needs to come to him from now on, she agrees.

Days of Our Lives Melinda Trask (Laura Kai Chen) is back and laughs over something on her table. Melinda tells Jack that he and Eve Deveraux (Kassie Depaiva) were a perfect match, both rotten to the core. Jack tells Melinda she let her daughter live in limbo all of her life to further her career. Melinda shares Jennifer Horton’s (Melissa Reeves) news article with him. Jack decides to go after Adrianne over Jennifer’s article.

Days of Our Lives Eve bursts into the Kiriakis mansion and tells Justin she needs his help to take Jack to court. Eve accuses Jack of rape to get Justin to represent her. Justin wants the truth, Eve hesitates. Eve wants to know why Justin doesn’t believe her. Justin wants Eve to look him in the eye and tell the truth. Eve cries and says she has lost everything.

Adrienne walks in and rips into Eve over everything she has done to Jack. Justin defends Eve to Adrienne. Justin argues that Eve is entitled to be compensated for helping Jack get his job. Justin says Eve wasn’t fired for cause, but revenge. Eve starts to leave, and Justin stops her. Eve leaves, and Justin tells Adrienne that he is going to represent Eve. Eve tells Jack she is going to sue him and Salem.

Days of Our Lives J.J. joins Jennifer, and they discuss Haley and Jack. Jennifer says that Abe thinks Jack wants to be the man he used to be, J.J. thinks he’s happy being an ass. J.J. leaves, and Jack approaches Jennifer on her way out the door. Jack and Jennifer argue about her latest article. Jennifer points out it is nothing but the truth. Jack thinks Jennifer needs to realize that the old Jack is dead and gone.