Days Of Our Lives Spoilers: Ben And Ciara In Grave Danger As They Find Themselves Trapped in Kristen’s Room 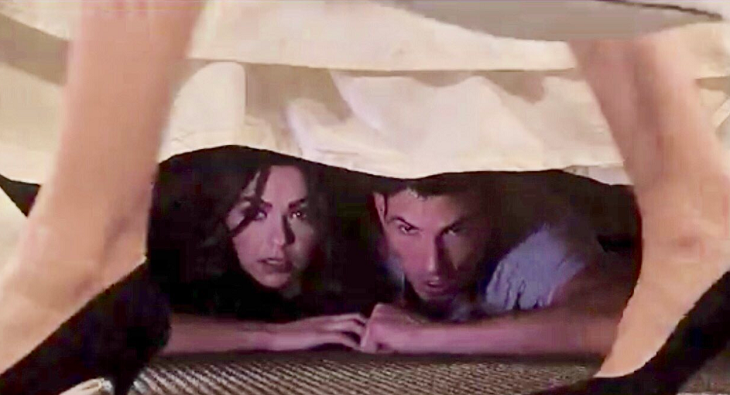 Days of Our Lives spoilers tease Ben Weston (Robert Scott Wilson) and Ciara Brady (Victoria Konefal) will do some sleuthing. As previously reported, the duo will begin their own investigation in an attempt to clear Stefan DiMera’s (Brandon Barash) name. However, the pair end up trapped in fake Nicole Walker’s (Arianne Zucker) room.

Stefan was thought to be one of the few surviving members of Stefano DiMera’s (Joseph Mascolo) family. Kristen DiMera (Stacy Haiduk), EJ DiMera (James Scott), Tony and Andre DiMera (both portrayed by Thaao Penghlis) were dead. Or at least that is what everyone thought. Now, it seems that all of Stefano’s  heirs are coming back to life.

As for Chad DiMera (Billy Flynn), he is in Paris and wanted nothing more to do with the company. Theo Carver (formerly Kyler Pettis) is in Africa receiving treatment for his injuries from a shooting. That leaves Stefan or someone related to a DiMera by marriage.

In a nutshell, Kristen wants control of DiMera Enterprises. Chad is already out of the way since he is in Paris. As for Stefan, Kristen needed to somehow get rid of him so she could be named the new CEO.

However, it was tricky since she didn’t want anyone knowing she was alive, at least not yet. That is when she came up with the Nicole mask scheme and started framing Stefan for crimes he didn’t commit.

After being kicked out by his new wife, Gabi Hernandez (Camila Banus), Stefan was arrested once again because of Kristen. It was because of her that Tony wrestled with Ted Laurent (Gilles Marini) over a gun, which led to Ted’s death. Then, Stefan was arrested for his murder. Desperate, he asks Ben to look into things and try to clear his name.

Days of Our Lives spoilers reveal Ben and Ciara will join forces in the investigation. At some point, they go to Kristen/Nicole’s room. Unfortunately, they will end up trapped. It is assumed that the villainess ends up coming back and they have to find a place to hide.

Kristen keeps her disguises in her luggage, which is stored in her hotel room. Ben and Ciara must come across it. If not, then Kristen, thinking she is alone, will rip off the Nicole mask, which is sure to be a shock for Ben and Ciara. However, will they be able to find a way out without getting caught?