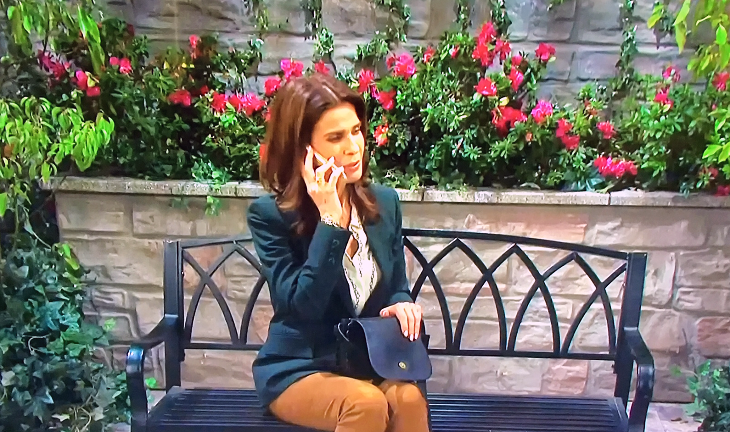 Days of Our Lives (DOOL) spoilers tease that Hope Brady (Kristian Alfonso) will be wanting some answers. Her sort-of boyfriend, Ted Laurent (Gilles Marini) was found murdered, and she desperately wants to know what happened to him. She knew before his death that Ted was into some trouble, but Ted refused to cough up the details, and now all she has is a few clues to work with.

Of course, since Hope is no longer a cop, she can’t officially launch an investigation into Ted’s death. The official investigation will be run by Eli Grant (Lamon Archey), the new police commissioner. But Hope will feel like she owes it to Ted to get some answers, plus, she feels that the police are on the wrong track. The police are focusing on Stefan DiMera (Brandon Barash), who was found standing over Ted’s body and holding the murder weapon.

But as DOOL viewers know, Stefan isn’t the one who killed Ted. Ted was killed during a struggle with Tony DiMera (Thaao Penghlis) after he tried to grab a gun and shoot Kristen DiMera (Stacy Haiduk). Kristen then moved Ted’s body to his apartment, where Stefan found him, and then the police found Stefan.

Because Hope wants to get to the bottom of who killed Ted, she’ll decide to go to John Black (Drake Hogestyn) for help. as DOOL viewers know, John’s a private detective, so she’ll want to team with him on the case, and he’ll readily accept the challenge.

Hope will share what she knows about the case with John, including how Ted was keeping something big from her, and how she encountered a mystery woman in the park who apparently threw away the necklace that came from Ted’s apartment. It looks like, from here, John and Hope will go on a quest to locate this woman, whom DOOL viewers know is Kristen.

According to Days of Our Lives spoilers, John and Hope will eventually end up zeroing in on Xander Kiriakis (Paul Telfer), and they’ll question him and ultimately get him to agree to some sort of deal. But it’s most likely that he won’t spill everything he knows, especially since he could be in serious danger from Kristen if he does.

As DOOL viewers know, Xander is well-aware that the person who everyone knows as Nicole Walker (Arianne Zucker) is Kristen, and he also knows that Nicole’s daughter Holly Jonas (Harlow and Scarlett Mallory) is alive. He likely won’t give up those details to Hope and John, which will make their job harder.

We’ll see what happens as Hope and John get closer to the truth about Ted. Of course, Ted’s death was accidental, after a struggle when he was going for Kristen’s gun. But it will likely take them some time to unravel the mystery, and to find out that Kristen is alive and is the one who moved the body.