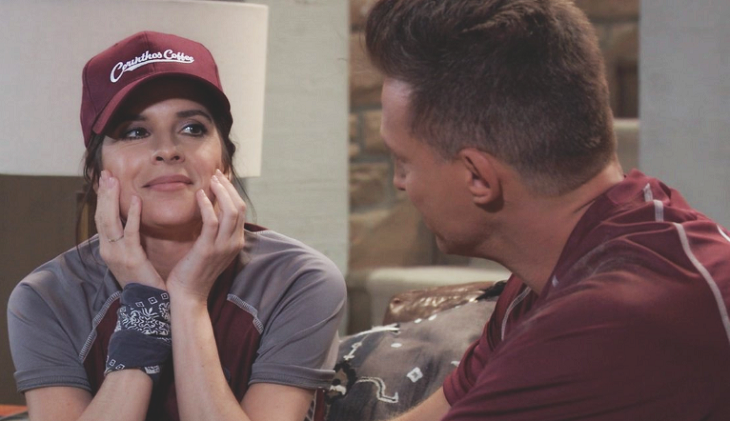 Sam is proud of Jason for hitting the game-winning run. Sam congratulates him and kisses him. Sam is upset that Jason didn’t allow her to be shortstop and wants to play next time. Sam is grateful to be alive. Jason scoops Sam up in his arms, and they start upstairs.

General Hospital’s Liesl Obrecht (Kathleen Gati) and Peter August (Wes Ramsey) argue over the game practice. Peter cannot promise that Jasper Jacks (Ingo Rademacher) will be there. Liesl says Jax has to play. Lulu Falconeri (Emme Rylan) arrives but doesn’t want to play. Dustin Phillips (Marc Lawson) shows up and is playing for Aurora. Lulu agrees to play and wants to make a bet with Dustin. Liesl is impressed with Jax and wants to make an impression on him. Peter tells Jax that Liesl has a thing for him.

General Hospital’s Hayden Barnes (Rebecca Budig) and Jax are at the hospital. Hayden has gotten into the computer and found out that Sasha Gilmore (Sofia Mattsson) has the flu, it’s nothing serious. Jax tells Hayden not to be that way in front of Nina Reeves (Cynthia Watros) and Valentin Cassadine (James Patrick Stuart). Hayden has a boat ready to go to Spoon Island and wants Jax to join her. Jax refuses to go. Hayden breaks into the trophy room. Liesl catches her in the trophy room and offers to help her.

General Hospital’s Liz Baldwin (Rebecca Herbst) and Drew Cain (Billy Miller) are trying to convince Franco that he is not Drew. Franco looks at his face and questions who he is. Liz begs Franco to come back to her. Liz shows Franco his hospital badges, and he still doesn’t believe she is right. Franco believes it is 2012, not 2019. Franco gets dressed and tries to leave the hospital. Drew and Liz try to keep Franco there. Liz promises they can find a doctor to fix this. Franco doesn’t believe Liz about the memory transfer.

Drew mentions Shiloh and tells Franco he knows him by David Henry Archer (Coby Ryan McLaughlin). Franco wants to confront Shiloh. Drew asks Franco to stay in town because people there care about him. Drew holds Liz back while Franco leaves. Franco pushes the elevator button and then sees Kim Nero (Tamara Braun) and calls her name.

Liz argues with Drew over Franco. Drew tells Liz that Franco isn’t going anywhere. Franco approaches Kim, who doesn’t know about the memory transfer. Franco begins to flirt with Kim and offers to leave town with her. Kim realizes Franco is a patient and asks what is wrong. Franco talks about singing to Kim. She is shocked by his memory. Franco pulls Kim into a kiss.

General Hospital’s Lucas Jones (Ryan Carnes) comes to the Pub and sees the for sale sign. Lucas wants and explanation about the move. Julian Jerome (William DeVry) tells Lucas this was a spur of the moment. Julian gets a call, and Kim talks to Lucas. Kim doesn’t want to take Lucas away from everyone. She tells Lucas to say the word, and she will leave alone.

Lucas wants Julian to be happy with Kim. They have his blessing to move. Kim leaves for work, allowing Lucas and Julian time alone. Julian is looking forward to a fresh start. Lucas wants to make sure he isn’t the reason Julian is leaving town.

Julian would have left a long time ago if he didn’t think he had a chance at a relationship with Lucas. Julian tell Lucas he knows this isn’t a quick fix for Kim, but it might make it easier. Lucas warns Julian that Kim is planning to leave with or without him.