General Hospital Spoilers: Drew And Liz Are Stunned As Franco Remembers Drew’s Past 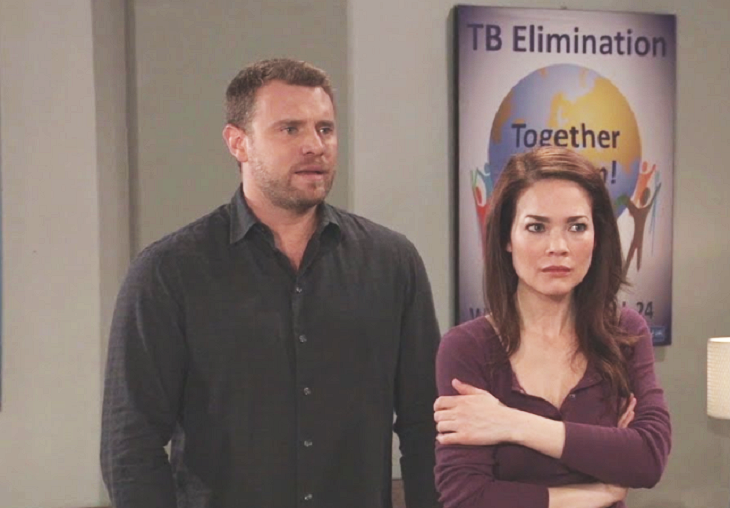 General Hospital spoilers tease that Drew Cain (Billy Miller) and Elizabeth Webber Baldwin (Rebecca Herbst) will be stunned when they find out Franco Baldwin (Roger Howarth) not only remembers Drew’s past, but acts like Drew did in the past.

Observant General Hospital viewers may have noticed something new has been added to the memory transfer process besides memories, as mentioned by Dr. Hamilton Finn (Michael Easton). He was talking to Jason Morgan (Steve Burton), Sam McCall (Kelly Monaco) and Elizabeth about how memories can be implanted in anyone, and that it didn’t necessarily need to be a person’s identical twin.

That in itself is a newly added addition by General Hospital writers, but Finn’s exact wording was “memories and personality” which is new and hadn’t been discussed in any other storylines. If this was true with all the previous transfers, including Ryan Chamberlain (Jon Lindstrom) and Kevin Collins (Jon Lindstrom) for instance, how is anyone to know if Ryan is really Ryan and Kevin is really Kevin unless all sets of twins are now required to be fingerprinted? Identical twins do not have identical fingerprints.

General Hospital Spoilers – Franco Baldwin Could Have Taken Them Both Down

It would have been wonderful if Drew’s pre-2012 memories and personality, and in particular his Seal combat skills would have taken effect immediately in Franco, and there not having been a time of unconsciousness in between the procedure and the transfer taking effect, but that doesn’t seem to be the way it will go!

General Hospital fans would have loved to see Franco as Seal Drew rip that contraption off his head, break through his restraints, and maybe even pull some Jason Morgan (Steve Burton) moves like knocking Dr. Arthur Cabot (Time Winters) and Shiloh Archer’s (Coby Ryan McLaughlin) heads together.

He could have rendered both of them unconscious, and then freed Cameron Webber (William Lipton) and making a run for it! Unfortunately, the writers didn’t choose to go that direction.

General Hospital Spoilers – Taking Down Shiloh Archer For His Past Crimes

Franco, with Drew’s memories, likely will be integral in taking down Shiloh for his past crimes in Afghanistan and may be able to pull the Naval Criminal Investigative Service, or NCIS into the investigation, along with the World Security Bureau, or WSB since Shiloh was a civilian contractor but stole fuel from Navy installations.

Plus, Shiloh has hidden assets in offshore accounts which could add federal charges such as tax evasion to his criminal resume, which could get other varieties of Feds after him as well. Undoubtedly, Cabot will face charges too, although not related to Shiloh’s charges. His will be for accessory to kidnapping, possibly practicing medicine without a license if his has been revoked, which it undoubtedly has, and experimenting on human beings with untested procedures.

General Hospital Spoilers: Nina And Valentin Tend To Sasha As She Recovers From Attack – Will Nina Still Care When Truth Comes Out https://t.co/H1HiVLxh20 pic.twitter.com/pRxNFsNtTR

It will be interesting to see what other problems are solved – or created – with Franco having Drew’s old memories and his personality as well; stay tuned to General Hospital and keep checking General Hospital spoilers frequently for all the latest news, updates and developments!